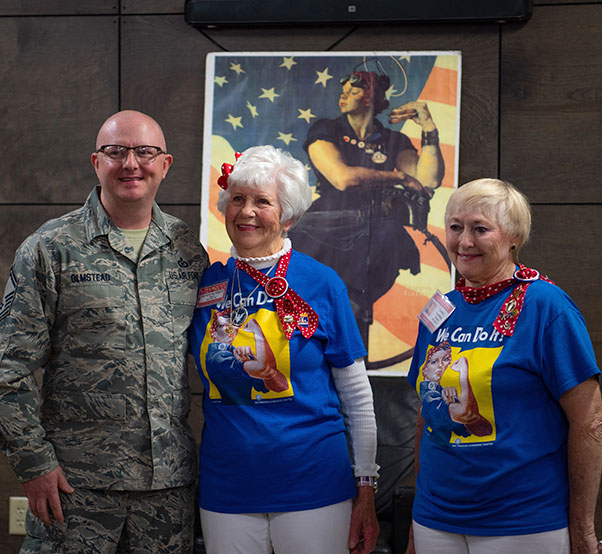 March has been observed as Women’s History month since the early 1980s, honoring the contributions women have made throughout history.

Luke Air Force Base in Arizona is conducting multiple events around the base to show support of our female Airmen such as a kick-off breakfast, a 1970s tribute to Active Duty women, a Girl Scouts of America tour and a Q&A with Luke’s women leaders.

Luke’s local “Rosie” spoke to a crowd of Thunderbolts about trials and tribulations that women have faced throughout history and the forward progress that has been made on that front.

“One historically important undertaking was that of the Rosie the Riveters from World War II,” said Senior Master Sgt. Michael Olmstead, 56th Operations Support Squadron superintendent. “This group of ladies had one of the biggest impacts to the outcome of the war.  There are only a few original ‘Rosie’s’ left and I feel a responsibility to continue to spread their story so their feat is not lost in time.” 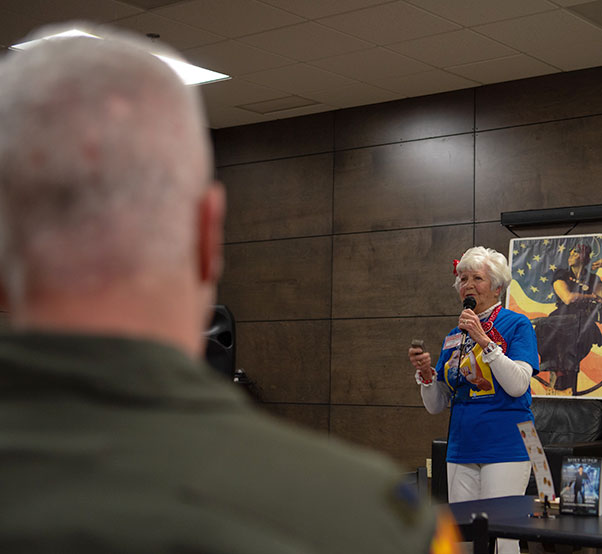 Col. Michael Richardson, 56th Fighter Wing vice commander, listens to Caroline Kilgore, a local “Rosie,” during a Women’s History Month kick-off breakfast, March 8, 2019 at Luke Air Force Base, Ariz. Kilgore, a Rosie with the Arizona American Rosie the Riveter Association Chapter spoke on how she contributed to World War II and all the challenges she faced.

Women make up a small percentage of the Air Force’s total force. According to the Air Force Personnel Center, not only do females make up less than 21% but they weren’t allowed to join fighter pilot training until 1993.

“There are several women throughout the military who are pioneers or firsts to many accomplishments throughout wars dating back to the revolutionary war,” Master Sgt. Timothy Navarre, 56th OSS aircrew flight equipment. “It’s the Commanders and leaders that step out of the status quo to push the envelope that open doors at every level.”

Historically women have struggled to gain appropriate representation so events like these are essential in maintaining awareness on women’s fight for equal rights and their place in the military along with their accomplishments.

“It’s an honor for the 56th Fighter Wing to highlight the accomplishments and sacrifices women have made throughout history,” Olmstead said. “It is our responsibility to identify potential leaders and promote them based on the merit of work.” 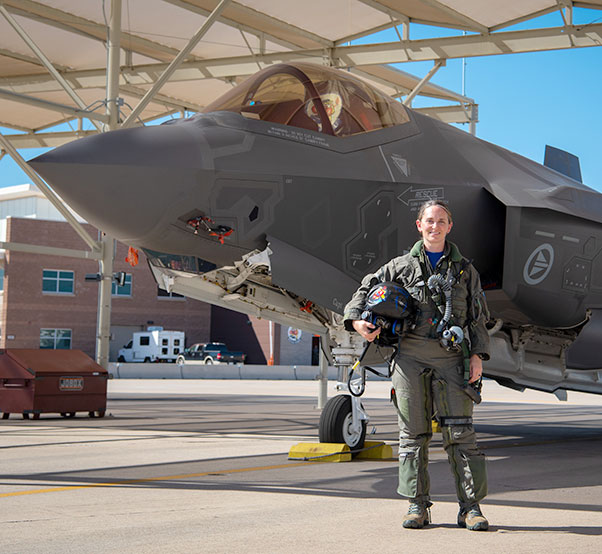 Maj. Valerie Wetzbarger, 62nd Fighter Squadron F-35A Lightning II instructor pilot, stands in front an F-35 after landing, Feb. 8, 2019, at Luke Air Force Base, Ariz. In 1993 women were allowed to start fighter pilot training in the Air Force for the first time. Currently the Air Force has over 850 female pilots.