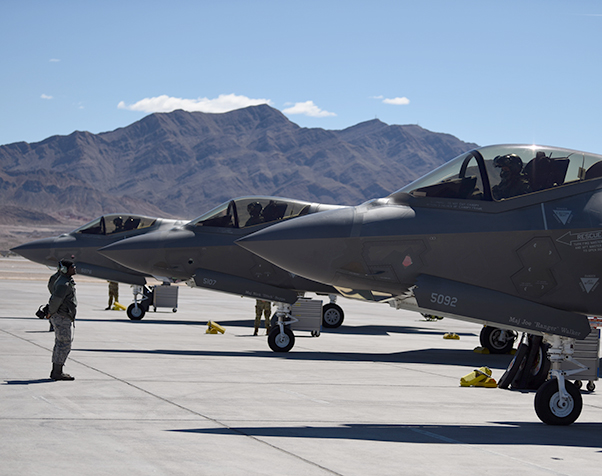 The “Spikes” of the 62nd Fighter Squadron returned from a successful trip to Red Flag at Nellis Air Force Base, Nev., March 22, 2019.

Their success could be measured by the fact that they have a training mission at Luke Air Force Base that had to continue while they were gone. They took five F-35A Lighting IIs with no student sorties lost at Luke. Or it could be measured with the 110 surface-to-air missiles they eliminated. Or perhaps the 87 total sorties supporting 18 large force missions with a perfect turn pattern.

“This was the first time the F-35 was the dedicated SEAD [Suppression of Enemy Air Defenses] asset,” said Lt. Col. Pete Lee, 62nd FS commander. “We had a job and it was to protect other people and the F-35 is very good at that. We have the legs to protect the entire strike train and we covered the whole time.”

While the stats read well, Lee also said the real story is that of the team’s integration and cohesion, which means much more to the 62nd FS and the F-35 program as a whole.
This was the first time the Italian and Norwegian F-35 instructor pilots from the 62nd FS were included in the exercise.

“We are all excited to have had this opportunity,” said Maj. Alessandro P., 62nd FS Italian instructor pilot. “It was an honor to be the project officer. It’s been a rewarding experience flying with my international partners in the complex scenarios with a fifth generation aircraft.”

The integration of partner nations in flying operations at Luke is a daily occurrence, however, operating at Red Flag brought a few hurdles that the 62nd FS addressed and pressed on.

“At first, no one quite knew what to do with us, but after the second week, our coalition partners saw that we could protect them and we earned their trust,” said Lee.  “Which was the purpose of Red Flag 19-2. Trust is the cornerstone and we were there building it.” 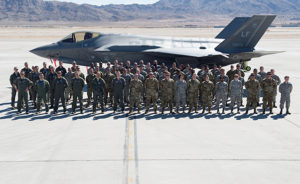 Members of the 62nd Fighter Squadron from Luke Air Force Base pose for a group photo March 9, 2019, at Nellis Air Force Base, Nev. The team traveled to Nellis AFB to participate in Red Flag, exercise 19-2, and included Italian, Norwegian and U.S. personnel.

The team’s cohesion went beyond that of the Spikes when Maj. Gen. Peter Gersten, U.S. Air Force Warfare Center commander, flew a mission in one of their F-35s with a Norwegian lead and two Italian instructor pilots.

“It was an honor to fly with the F-35 Italian and Norwegian instructor team here at Red Flag,” said Gersten.  “Our network of alliances and partnerships are the backbone of global security, and exercises like Red Flag help strengthen these relationships. Likewise, the F-35 program was designed to integrate strategic partners and allies so we can train like we fight. While it’s imperative our technology can integrate to accomplish the mission, it ultimately comes down to the Airmen of our nations working together who truly make the difference.  I was proud to be a part of the mission and observe firsthand the professionalism of this outstanding team.”

The other takeaways from the exercise came in many forms and Lee added that while they taught the participating units about the integration of the F-35 in a strike package, his team learned a lot from the others as well.

“We are a learning organization and Red Flag was the classroom,” said Lee. “The instructor pilots that we brought back are fired up about teaching what they learned and what matters is how we spread that knowledge.”