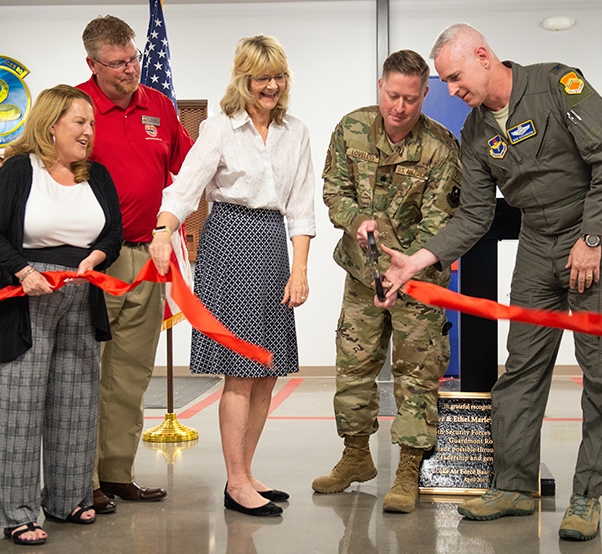 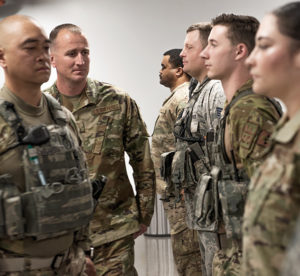 Airmen assigned to the 56th Security Forces Squadron perform open ranks (inspection?) during a ribbon cutting ceremony at the 56th SFS guard mount building on Luke Air Force Base, Ariz., April 25, 2019. Open ranks was performed to ensure each of the defenders were properly equipped with all gear and uniform requirements.

The 56th Security Forces Squadron at Luke Air Force Base, Ariz., celebrated the opening of their new guard mount building with Luke Thunderbolts and community members during an April 25 ribbon cutting ceremony.

In the past, security forces Airmen prepared for their shift outside in formation before reporting to their designated areas around base. Now, just as the summer temperatures begin to rise, the defenders have a climate controlled area to ensure they are ready for their post.

Col. Michael Richardson, 56th Fighter Wing vice commander, and Col. Robert Sylvester, 56th Mission Support Group commander, spoke during the event thanking those in attendance for their support throughout the six-month-long project and showing their excitement for the new space.

“A lot of new defenders just arrived at Luke and this is their first impression of guard mount. I can tell you, any base they go to after this they’re going to be saying ‘Hey, at Luke we had this,’ said Sylvester. “Before they would have gone someplace else, it could have been horrible and they would’ve said ‘Wow, this is a lot better than what we had at Luke.” 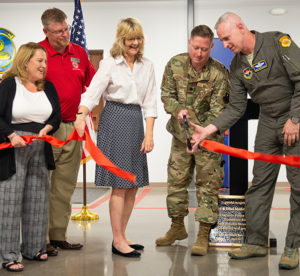 “We never send defenders into a fair fight,” said Tech. Sgt. Kenneth McGregor, 56th SFS resource protection. “The building will allow us to do things like combative and non-lethal weapons training. It all enhances our tactical advantage – which helps us execute our law and order operations.”

Luke defenders are tasked with ensuring the safety of thousands of Thunderbolts who work and live on base, in addition to protecting property and resources. Upgrading their work environment is one way the 56th SFS continues to protect the base and ensure the wing continues to train the world’s greatest fighter pilots and combat ready Airmen.

“These Airmen deserve our best,” said Sylvester. “Whatever we can do to support them … we owe that to them.”