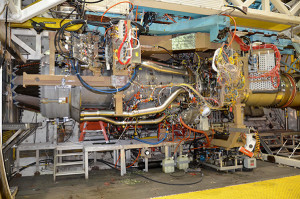 Military turbofan engines currently have just two airstreams, one that passes through the core of the engine and another that bypasses the core. The development of a third stream will provide an additional source of air flow to improve propulsive efficiency lower fuel burn and provide additional cooling air, or to deliver additional air flow through the core for higher thrust. Having a third stream of air that can be modulated to adapt the engine’s performance across the flight envelope means a fighter can access an on-demand increase in thrust or smoothly shift to highly efficient operations during cruise. This capability provides an ideal balance for combat scenarios requiring both high-end acceleration and increased range. The goal of the AETD program is to provide a 25 percent reduction in fuel consumption and a 10 percent improvement in thrust levels compared to today’s fifth-generation combat aircraft engines.

Of the AETD fan testing, Richard Walker, AETD test manager and Advanced Engine Integrated Product team lead at Arnold, mentioned that the test team worked around the clock for several weeks prior to and during the test in order to meet schedule.

“We had guys working 24/7 prepping for the test and then we had such a small test window that we asked the team to execute 237 scheduled air-on hours in six weeks,” he said. “I really have to praise our team because even with all the challenges concerning the schedule, the test program was successful.”

The engine installation and test schedules were compressed to facilitate completion of the test program prior to the Engine Test Facility summer maintenance outage.

Walker mentioned the testing began in early May and ended mid-June. A total of 10 test periods were completed in six weeks. Extended test period durations, up to 40 scheduled air-on hours, were utilized to compress the test schedule.

“So it was a very short duration to accomplish the objectives,” Walker said.

Furthermore, being a unique experimental configuration, the engine was heavily instrumented. The number of dynamic instrumentation channels installed on the engine exceeded the J2 data acquisition capacity, which meant that only a subset of the instrumentation channels could be recorded on a given test period. Accordingly, the test team defined several blocks (groupings) of instrumentation, and aligned each block with specific test objectives.
Justin Thompson, AEDC test engineer, explained that testing an experimental engine is interesting and always involves some challenges.

“We would have one day between reviewing the findings of one test, making changes and then testing again,” he said.

Members of both AFRL and Pratt & Whitney have been complimentary of the work the AEDC test teams put in, giving credit for the test’s success.

“Thanks for all your support over this test period,” said Jason Parson, with Air Force Research Laboratory’s AETD program. “You and your guys did great work, particularly in the latter half where we had several outstanding runs.”

Steve Cruz, with Pratt & Whitney, said, “You guys are a big part in us being successful and I wanted to sincerely give you guys a big thank you.”

According to a recent Pratt & Whitney announcement, the success of this test demonstrates that the company is well on its way to meeting future U.S. Air Force requirements for combat aircraft propulsion.