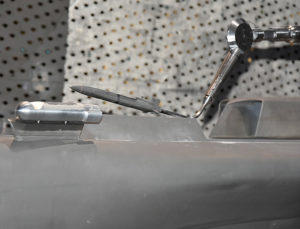 A store model positions near one of the three weapons bays on a 10 percent model of the B-1B Lancer. For the first time since 2000, the B-1B is involved in testing at Arnold Air Force Base. Tests are currently ongoing to determine the effects a newly-introduced targeting pod for the B-1B would have on stores released from the aircraft.

It had been nearly 20 years since a test involving the B-1B Lancer aircraft was conducted by Arnold Engineering Development Complex at Arnold Air Force Base, Tenn.

This long absence recently came to an end, as a 10 percent model of the bomber, known in the flight world as “The Bone,” is now being used to conduct a series of store separation tests in the 16-foot transonic wind tunnel at Arnold.

The tests, which began earlier this year, were requested by an AEDC testing partner, the Air Force SEEK EAGLE Office (AFSEO), based out of Eglin Air Force Base, Florida. A new targeting pod design has been introduced for the aircraft, and officials in the SEEK EAGLE Office will examine the effects of the new pod on the B-1B Lancer. Tests will be conducted on five different store models at Arnold to determine whether the full-size munitions will cleanly release from the actual bomber during flight.

“AFSEO and AEDC engineers are running numerous tests in the wind tunnel to collect data that will allow them to analyze the forces, moments and aerodynamic effects on the store and be able to determine if the trajectories from the aircraft are safe and effective for flight,” said 1st Lt. Johnathan Gutierrez, test manager in the Flight Systems Combined Test Force. “One end goal is to make sure that once a store leaves the aircraft, it moves away from the aircraft and not back towards it in aerodynamic flight.”

The targeting pod currently used on the B-1B Lancer has been in place for about 10 years. Gutierrez said the new pod configuration will enhance the avionics of the weapons system, bolstering the aircrew’s ability to locate a target.

“Because the pod has a different shape than the original one, the engineers need to study the aerodynamic effects of that on the aircraft and the weapons as they release from the aircraft, because if they encounter turbulence or other disturbances across those weapons bays, then it is likely to cause the store to behave in a way that’s unfavorable for the aircrew,” Gutierrez said.

The Captive Trajectory System, or CTS, in the 16-foot transonic wind tunnel, also known as 16T, is used to position the store models at any of the weapons bays of the B-1B Lancer.

One of the testing methods involves using the CTS to place a store close to a weapons bay and simulating the release of the munition. Depending on the aerodynamic effects the store sensors are reading, the store will drive itself away from the aircraft model as it is in actual free flight. The test system will run continuous calculations to determine where the store should be going as the store continues to drive itself. This test studies the behavior of the store as it leaves the aircraft. Engineers input specific commands for the store before testing is done. 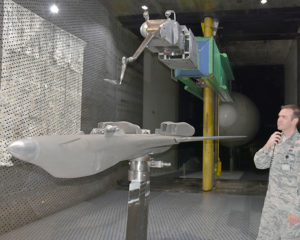 Lt. Johnathan Gutierrez, test manager in the Flight Systems Combined Test Force at Arnold Air Force Base, looks on as a store model performs an offline simulation of store separation from a 10 percent model of the B-1B Lancer. Store separation tests are currently being conducted in the 16-foot transonic wind tunnel at Arnold to assess the impact a newly-introduced targeting pod for the B-1B would have on stores released from the aircraft.

Further testing to examine stores at specific trajectories away from the aircraft are completed later.

“We can take that store and roll it negative 90 degrees to positive 90 degrees. We can pitch it up or down. We can yaw it side-to-side,” Gutierrez said. “It just depends on what our customer wants to see based upon how they think the store will behave as it leaves the aircraft, and then they can examine data to come closer to that.”

Gutierrez reiterated that the testing now being conducted is vital in ensuring the safety of the B-1B aircrew.

“If we put something out there that’s untested, then there is a significantly higher risk to the aircrew,” he said. “But the AEDC and AFSEO team is going to crunch the numbers and do the engineering work to find out if that’s safe for flight.”

The B-1B Lancer has served the U.S. Air Force since the mid-1980s, and Gutierrez said the aircraft is still used regularly. Prior to the recent efforts, the last test at Arnold involving the B-1B — also a store separation test — occurred in 2000.

The aircraft is capable of carrying many payloads, so individual tests can last anywhere from a few days to multiple months. The ongoing testing is expected to continue through mid-Spring.