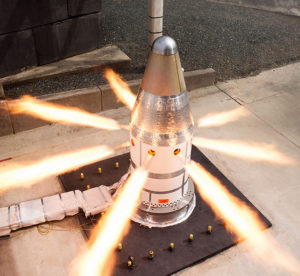 The attitude control motor fires during a test at Northrop Grumman’s facility in Elkton, Md.

Engineers completed two key tests the week of March 18 to help ensure NASA’s Orion spacecraft is ready from liftoff to splashdown for missions to the Moon.

Teams successfully tested one of the motors on Orion’s Launch Abort System responsible for taking the crew to safety in an emergency during launch, and completed testing at sea for the qualification of the system used to upright Orion after it lands in the ocean.

At its facility in Elkton, Md., Northrop Grumman hot fired a motor for Orion’s launch abort system. The attitude control motor is responsible for orienting the crew module for landing in the event that Orion’s ride to space experiences a failure during launch or ascent. The motor is essential because it helps stabilize Orion and control its trajectory as it moves away from the rocket. During the 30-second test, the motor produced more than 7,000 pounds of thrust from eight valves. This test was the first in a series of evaluations aimed at qualifying the attitude control motor for crewed missions.

Orion’s launch abort system is positioned on top of the crew module and is designed to protect astronauts during their trip to space. It can activate within milliseconds to pull the crew module to safety if needed. It consists of three solid rocket motors: the abort motor that pulls the crew module away from a rocket, the attitude control motor that can steer Orion in any direction upon command, and the jettison motor that ignites to separate the launch abort system from the spacecraft so that Orion is free to deploy its parachutes to assist with landing.

Ensuring crew safety continues throughout the mission, including systems used to assist with returning astronauts to land. Off the coast of Atlantic Beach, N.C., engineers tested the crew module uprighting system to ensure the capsule can be oriented right-side up once it returns from its deep space missions.

When Orion splashes down in the ocean, it can settle in one of two positions. In the most ideal scenario, the capsule is oriented with the heat shield in the water and its windows and hatches out of the water. The crew module also could land with the top submerged in the water, and the heat shield facing the sky. The CMUS deploys a series of five, bright orange airbags to flip the capsule right side up in the event the Orion lands upside down. It takes less than four minutes for the system to upright the capsule to help protect the astronauts inside that are returning home from future deep space missions. 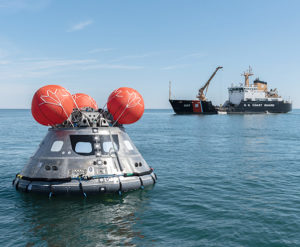 In a perfect post-mission landing situation, all five of Orion’s airbags will deploy to reorient the capsule, and while this is the most likely scenario for capsule recovery, NASA aims to be ready for any situation. Several tests performed with a mockup of the Orion crew capsule demonstrated that even if one of the airbags failed to inflate, the CMUS would still be able to perform as intended.

The system was previously tested in the Neutral Buoyancy Lab, a giant pool at NASA’s Johnson Space Center in Houston, primarily used for astronaut training, as well as off the coast of Galveston, Texas. Engineers also wanted to test the uprighting system in more challenging waves, similar to those where Orion is expected to land, and partnered with the Coast Guard to test the CMUS in the Atlantic Ocean.

Engineers experimented with four different CMUS configurations over several days of testing. These tests verified the system’s ability to perform in varying wave conditions, and demonstrated how the CMUS would protect the crew in a wide range of landing scenarios.

“Performing full-scale integrated testing like this at-sea is very complex. The recent CMUS accomplishments were the result of years of work and planning on this critical system needed to enable safe crew recovery of future Orion missions,” said Tara Radke, Orion Integrated Landing and Recovery System manager. “I’m grateful to our dedicated team for their support that made these tests all a huge success.”

With the success of both tests, the Orion team is well on its way to verify Orion is ready for missions to the Moon and beyond.