WASHINGTON (AFNS) — A veteran from the greatest generation was awarded the Presidential Unit Citation with one oak leaf cluster by Sen. John S. McCain on Capitol Hill, July 7.

“When I became a naval aviator, there was still some of the greatest generation that were on the aircraft carriers that I flew off of,” McCain said. “There is no doubt that my generation and this generation of young aviators are inspired by the exploits and the bravery and the courage of Lieutenant Pedevillano and all the others [from the] greatest generation.”

“The heroism and dedication to duty demonstrated by the 8th Air Force and the 306th Bomb Group continue to be an inspiration to the Air Force today,” said Gen. Larry O. Spencer, Air Force Vice Chief of Staff. “Thank you doesn’t seem like enough, but thank you for your service. We in the military [and everyone] that came behind you, are standing on your shoulders. Your example of courage is what we all aspire to be.”

During the war, Pedevillano’s B-17 was struck by enemy fighters. His aircraft went down , with the crew eventually captured and taken to a German prison.

After more than a year as a POW, the Nazis forced Pedevillano to march 300 miles in an attempt to evade allied forces. On April 12, 1945, Pedevillano was liberated by forces led by Gen. George S. Patton. 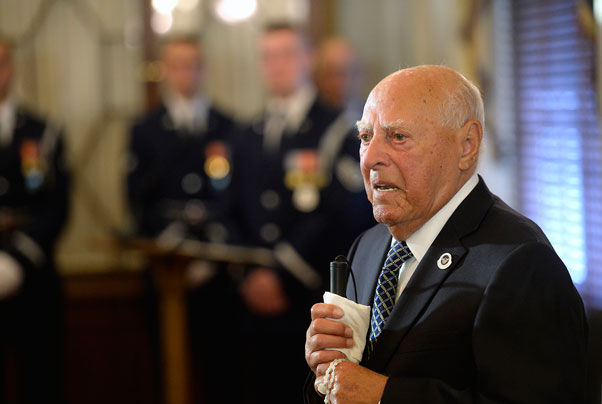 “The man we are honoring today … helped write one of the most memorable and honorable chapters in American history,” McCain said. “It is my great honor to present you with this small token of our nation’s appreciation for your service and sacrifice. We honor you; we are grateful to you; and I promise you are an inspiration to those who are now serving and those who will continue to serve.”

In front of a room full of his friends and family, Pedevillano received his Presidential Unit Citation.

“All I can say is, God bless the military, thank you,” said Pedevillano as he gripped his cane in one hand and a pure white rosary in the other, tears began to swell in his eyes. “I just can’t thank this country enough for what they have done for me and for all of us. I just break down when I think of all the blessings I have been given all my life. I am just one of millions and I didn’t expect any of this. I didn’t do anything more than anybody else would have.”