The Seventh Annual Mojave Experimental Fly-in was bigger than ever at the Mojave Air and Spaceport, especially since Stratolaunch made their first test flight early the same morning, leaving the runway at 6:58 a.m.

It really brought home the message that was touted on the event flyer – “to celebrate the unique aerospace development culture of Mojave and to see one-of-a-kind experimental and developmental projects.”

More than 160 aircraft flew in to Mojave for the event and were landing on Runway 26, as Stratolaunch, the largest all composite aircraft, with a wingspan of 385-feet, was taxiing into position for takeoff on Runway 30.

General Manager and CEO of Mojave Air and Spaceport, Karina Drees said, “We are looking forward to next year, but this one will be hard to top!” Aircraft were arriving and departing all day long.

The celebration kicked off the night before with the Indoor Fly-in Build & Fly Competition in the Witt Event Center, a very large building with a unique history from World War II. The building housed the Marine Corps Air Station Mojave Olympic sized swimming pool with a Dilbert Dunker that was used to train Marine Corps pilots in surviving a water ditching. 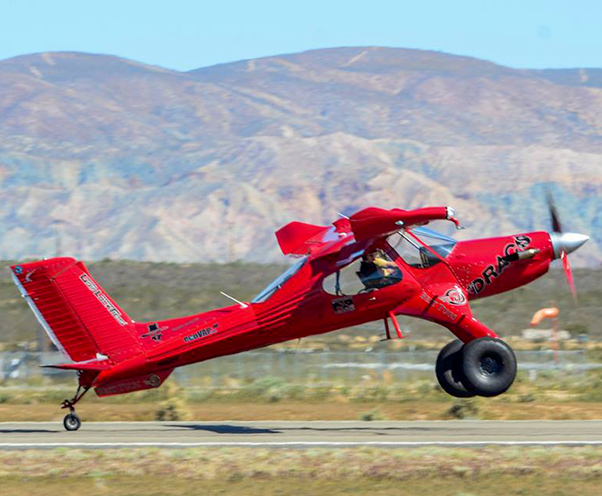 The real showstopper at MEFI this year was Mike Patey’s DRACO, a 680 shaft-horsepower Pratt & Whitney PT-6A-28 turbo-prop fitted on a PZL Wilga 2000, the ultimate “bush plane.”

Brian Min, member of the Tehachapi Crosswinds RC model airplane group and Scaled Composites engineer, spearheaded the fifth Annual Indoor Build and Fly Competition again this year. The fun family oriented event is a draw for modelers of all ages and all skill levels.

Event coordinator Rebecca Reeder said, “It’s always a delight to see the expression on a little person’s face when the airplane they just built with their own hands glides effortlessly through the air.”

“The seeds of aerospace design and the thrill of flight are firmly planted into their minds. That moment will stay with them forever,” she said. 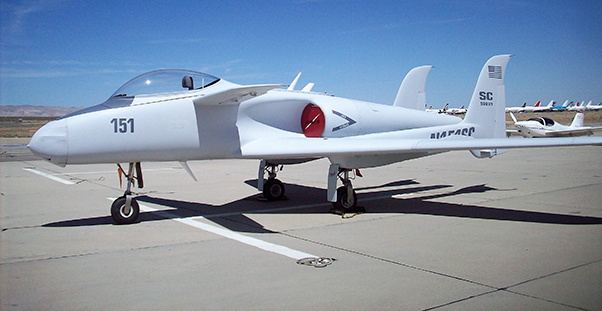 Scaled Composites displayed ARES (Agile Responsive Effective Support) demonstrator aircraft. First flight of ARES was Feb. 16, 1990. ARES is a full-scale proof-of-concept demonstrator that was developed as a concept in support of a U.S. Army request for a Low Cost Battlefield Attack Aircraft. The LCBAA design goals were low-altitude, anti-tank, battlefield support with long endurance, and capable of operating outside of improved airfields environment.

Zach Reeder, engineer and pilot at Scaled Composites and Stratolaunch, had the Rutan Catbird front and center on the flightline. In 2014, Zach flew Catbird to set a 5,000 kilometer, closed-course speed record at 211 mph. The record attempt required him to design and construct extensive modifications to the plane. 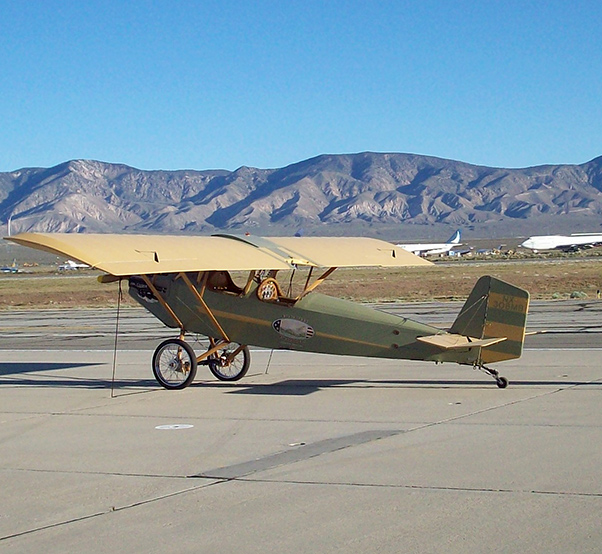 The award for Best Build went to Edgar ‘KTOWN’ Knouse and his Pietenpol Air Camper.

The Catbird led a low-key career and is seldom documented, but it is a true milestone in Rutan’s designing career. The Catbird never made it into production, and was left hanging upside down from the rooftop in Scaled Composites’ workshop for most of its lifetime and was even deregistered.

To mark Burt Rutan’s retirement from Scaled Composites, Zach Reeder asked to restore the aircraft and re-register it for the 2011 Oshkosh celebration of Rutan’s career and achievements. He has maintained the aircraft ever since.

An Awards Lunch was held at 1 p.m. in the Hansen Hangar on the west end of the field. Trophy awards were made by Aero Design Engineering and Fabrication Services, in Rosamond. 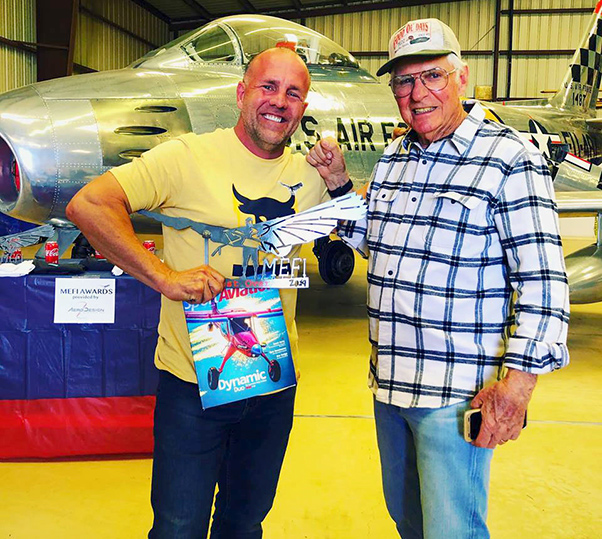 The real showstopper at MEFI this year was Mike Patey’s DRACO, a 680 shaft-horsepower Pratt & Whitney PT-6A-28 turbo-prop fitted on a PZL Wilga 2000, the ultimate “bush plane.”

Patey did a demo fly-by showing the climbing abilities of DRACO. Patey redesigned the wings, making them longer and wider (plus-12 inches span, plus-11 inches chord). He redesigned the elevators and rudder. Also, he made bigger wing fuel tanks and special landing gear-leg tanks. Patey upgraded the brakes and added 35-inch main gear tires. He installed a new digital cockpit with autopilot, infrared night vision, and a backup camera, installed new wiring, heating and electrical systems, and HID landing lights from a 737 airliner. He wants to fly DRACO to Alaska and is planning to add more fuel tanks in the wings for the trip. 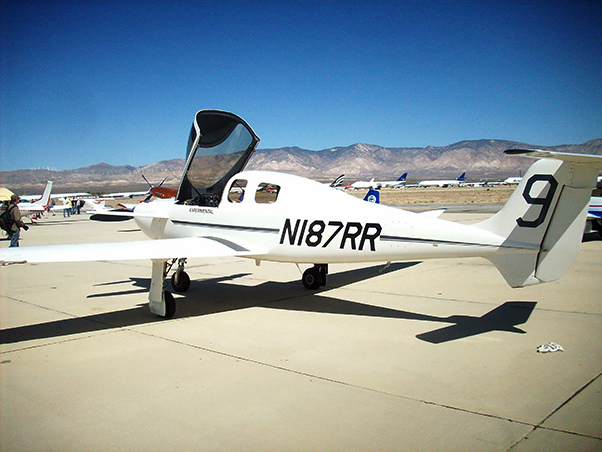 Zach Reeder, engineer and pilot at Scaled Composites and Stratolaunch, had the Rutan Catbird front and center on the flightline.

Appreciation was expressed to all who helped make this year’s Mojave Experimental Fly-In a huge success. Rebecca and Zach Reeder were the driving force for this year’s event.

Zach pulled double duty as he was in the Cessna Citation flying chase for Stratolaunch earlier in the day.

All of the crews at Mojave Air and Spaceport gave exceptional support and the Mojave Tower put in a full day with the 2.5 hour test flight, plus 167 aircraft landing and departing throughout the day.

World renowned record-setting Voyager pilot was on hand to congratulate Mike Patey on his Best Overall win at MEFI this year. 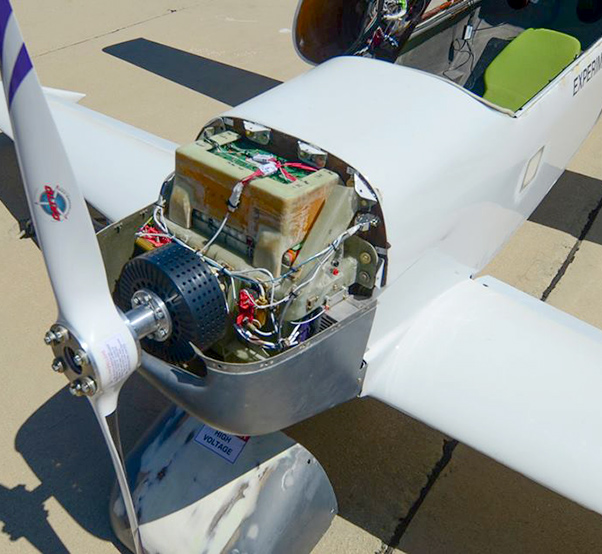