It was March 1942 and college student Charles McGee was studying engineering at the University of Illinois in Champaign.

Less than four months prior, the Japanese had bombed Pearl Harbor in Hawaii, and the U.S. was at war.

“In ROTC I learned to handle a rifle pretty well,” he said. “But because I was in school, my draft board wasn’t pulling my number.” 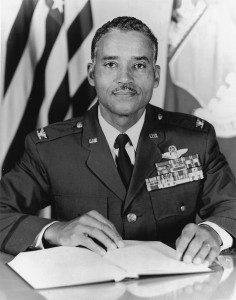 McGee figured it couldn’t last long; the draft wouldn’t come after him, especially as things heated up in Europe.

“Had they, I would have probably been on the ground with that rifle,” he said.

In nearby Rantoul, Ill., McGee said he learned the Army Air Corps had set up a training school for Black aircraft mechanics on Chanute Air Field.

“I was in school [at the] university 14 miles away, and that’s really where I learned about the program,” he said. “The Army policy was they couldn’t use [Black] pilots because they had no Black mechanics.”

The Army training Black aircraft mechanics meant the Army was also looking for Black pilots as well, McGee figured, something which interested him more than the prospect of being a ground-pounder with a rifle.

McGee opted to get involved in something that interested him, and soon found himself in Tuskegee, Ala., learning to fly military aircraft.

“I heard about the aviation opportunity and passed the exams,” he said. “[After] my first flight in a PT-17, to be able to go up there and loop roll and spin and come back and put your feet on the ground, I was hooked! Never have I forgotten that first day.”

McGee ended up flying in World War II for the Army as part of what are now called the Tuskegee Airmen, a group of Black pilots and ground personnel with a remarkable service record during the war.

“I served in the Mediterranean theater in World War II in the 302nd Squadron of the 332nd Fighter Group,” he said. “We went directly to Italy in the spring of 1944, and I served almost a year because I ended my time there in November.”

In Europe, he said, one of his proudest missions involved providing an escort for aircraft that would repatriate hundreds of downed crewmen who were being protected from the Germans by the Yugoslavians.

“It was just wonderful to realize that the hundreds of Americans were able to get back home,” he said.

The second world war ended in 1945, and shortly after, in 1947, the U.S. Air Force was created from the Army Air Corps. McGee stayed on and became part of the new service.

It was around that time, he said, the U.S. armed forces began to integrate, and the Air Force was the first to make it happen. Another war would speed things up for the services that were dragging their heels.

“The Navy and the Army were pretty slow,” he said. “Well, they really got on board in the Korean timeframe. But the Air Force led our country in providing equal access and equal opportunity for all.”

McGee served in World War II, the Korean War and Vietnam, and flew more than 400 combat missions across all three wars. He also earned a Distinguished Flying Cross while serving in Korea, it was one of his proudest moments, he said. He retired from service in 1973 as an Air Force colonel, and in 2007 was, along with other Tuskegee Airmen, awarded the Congressional Gold Medal. In February of last year, President Trump promoted McGee to brigadier general.

In World War II, McGee and other pilots who were part of the Tuskegee Airmen had broken down barriers for the Black service members who would follow. But he said he and the others didn’t see it that way when they were training or flying missions.

“We didn’t go south to say we’re going to go set the world on fire,” he said. “For some it was an opportunity that they had always wanted, they saw an airplane when they were little, or had a ride and wanted to do that. They were there for that. For myself, or [the] country to come out of 10 years of depression, the declaration of war to support our allies in Europe, it didn’t change segregation, but it changed opportunity. The need opened that door.”

While McGee said he didn’t think about changing the world when he chose to go fly for the Army, two things he was thinking about were freedom and opportunity.

“What freedom means to me is the fact that although there were those who said I couldn’t do something because of my happenstance of birth,” he said. “Freedom provided the opportunity to serve and prove that it’s not just an idea for somebody to tell you can’t do something, it also requires the endeavor from yourself, that yes I can. And it’s in freedom that you get the opportunity to prove that you have abilities. They can be developed to not only help you as an individual, but what it means in the area of business, jobs and opportunities, you can’t beat it. Freedom is the key to providing such opportunity for one and all.”

Now more than 100 years old, McGee talks today with a lot of young people at schools and other public-speaking events. To emulate his success, he said, he’s got a formula he calls “the four Ps,” something he said works equally well for adults.

“Perceive, dream your dreams,” he said. “Find out what your talents are. And I like to add, and hopefully among them is something you really enjoy doing, as I enjoyed my flying experiences.”

Preparation is also important, he said. And that means getting a good education.

“Learn to read, write and speak well, and develop those talents,” he said. “Unfortunately, all of our youngsters aren’t getting that opportunity.”

Once you’ve set a goal for yourself, he said, and you’ve gotten the education for how to do it, it’s all about doing it and doing it well. Performance matter, he said.

And finally, he said, is perseverance, pressing on even when there is something pushing back.

“Don’t let circumstances of folks telling you can’t do something be an excuse for not achieving,” he said. “We could have gone off, bowed our heads, and said they called me names and they don’t like me and don’t want me and not served our country.

But look at what that would have meant, what we did accomplish.”

Perhaps a fifth “P,” not included in his four, is “patriotism”, which McGee has quite a bit of.

“America is the greatest nation on Earth because of the values that we like to sustain,” he said. “Some of them aren’t always supported by everybody around the country. But the fact that the chance for opportunity is there, and of course you have to prepare. A good education program is very important, there’s more than one step for that accomplishment. … We adults need to mentor the young folks because they are our country’s future. And there are many things out there they don’t need to get into, but there are many things they do need to, to keep America the greatest. “On July 21, all four Crew-2 astronauts boarded Endeavour for a port relocation maneuver, moving their spacecraft from the forward-facing port to the space-facing port on the station’s Harmony module.

The Crew-2 flight is part of NASA’s Commercial Crew Program, which has worked with the U.S. aerospace industry to launch astronauts on American rockets and spacecraft from American soil to the space station. The splashdown of Crew-2 comes just before the launch of NASA’s SpaceX Crew-3 mission, currently scheduled for no earlier than Wednesday, Nov. 10, on another long duration mission of approximately six months.

Endeavour will return for inspection and processing to SpaceX’s Dragon Lair in Florida, where teams will examine the spacecraft’s data and performance throughout the flight.

Following Crew-3’s launch, the next NASA and SpaceX crew rotation mission is Crew-4, currently targeted for launch in April 2022. Crew-3 astronauts are scheduled to return to Earth shortly after welcoming their Crew-4 colleagues to the orbiting laboratory.

The goal of NASA’s Commercial Crew Program is safe, reliable, and cost-effective transportation to and from the International Space Station. This already has provided additional research time and has increased the opportunity for discovery aboard humanity’s microgravity testbed for exploration, including helping NASA prepare for human exploration of the Moon and Mars.