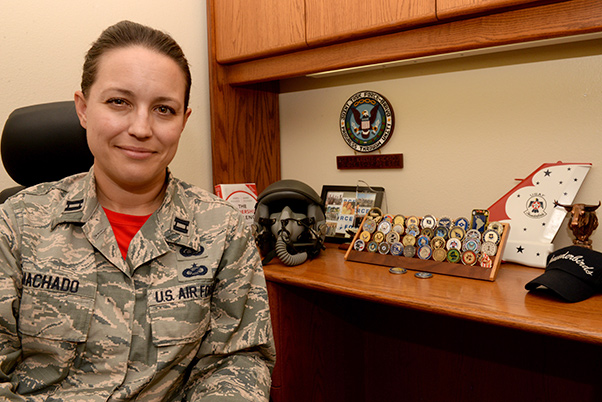 To become an officer in the U.S. Air Force, an individual must display strong moral character, high academic strength, and be devoted to an honorable conduct with a persistent exemplification of integrity, service, and excellence in all that they do.

Individuals who seek to transition into this increased responsibility from enlisted service face the additional challenge of maintaining an outstanding career with which to compete against the large pool of applicants.

To be selected and successfully become an officer is not only an honor, it is a reflection of one’s accomplishments and leadership potential. For Capt. Kristi Machado, 56th Force Support Squadron sustainment services flight commander at Luke Air Force Base, Ariz., selection came naturally.

“You’re given opportunities at certain times and places in your life and what you do with that opportunity shapes where you go next,” Machado said. “Every experience I’ve had, whether it’s perceived to be good or bad, has been one that I wouldn’t give back, because it has very much shaped the person I am today.”

At first glance, Machado’s stature is unassuming. She is petite, and though for her wise and confident gaze through wide hazel eyes, she looks young. Any idea of youthful naiveté is quickly dispelled when she speaks, however. Her words seize attention with a knowledgeable and authoritative tone backed by decades of experience. 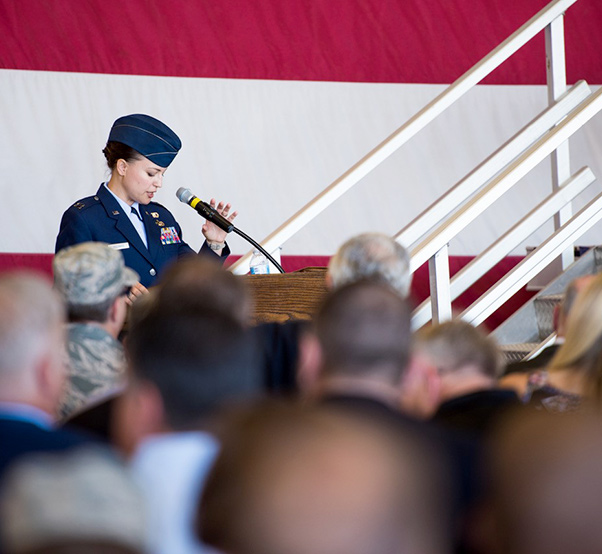 “As you progress in your career and you advance in rank, you find that your responsibilities change and your role in the organization changes,” said Machado. “You take what you get and you learn from it. Every experience you have, you take something away.”

A DeLand, Fla., native, Machado’s aspirations for the Air Force were originally born both out of a career pragmatism and family heritage.

“I had graduated college in 2000 with an art degree, and moved up to Gainsville, Fla., where I got a job at the local printing press,” Machado said. “I had always told myself that if I didn’t find an upwardly mobile job within that first year there that I would consider the military. I had family that was in the military; my grandfather, my step-grandfather, a cousin in the Air Force, and aunts and uncles who were all in.”

Those plans aligned with sudden events in September, 2001 and Machado’s motivations grew into a sense of duty. She first stepped into a recruiter’s office in October.

“I never at any point thought, ‘Oh, that life isn’t for me,’ but it wasn’t something I was actively pursuing,” Machado said. “And then September 11 happened, and I think for me it ended up coming much more into the forefront and that’s when I went to my recruiter.” 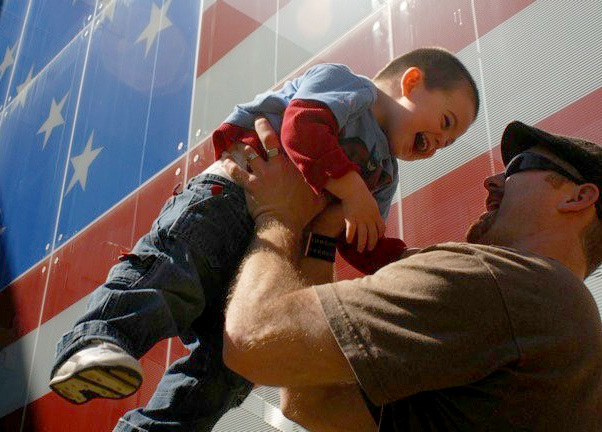 Machado’s family, friends, and military acquaintances, even from other branches, had all recommended the Air Force to her for its depth of opportunities. Originally interested in a commission, officer positions in the Air Force faced a tremendous surplus of applicants in the wake of the start of the War on Terror. Machado’s recruiter suggested an alternative path to a commission by enlisting first.

On December 7, 2001, Machado swore her oath of enlistment. Her first assignment was to Altus Air Force Base, Okla., as a still photographer.

“I took my [Armed Services Vocational Aptitude Battery] and scored well, and because of my bachelor’s degree, my recruiter was able to put me in a category that allowed me to pick up to three jobs and he could guarantee me one of those three,” Machado said. “I ended up picking two. One of those was still photographer. He called me shortly thereafter and said I got a photography slot, and that was that.”

Machado’s duties included news photography, historical documentation, and emergency response photography. Over three years she amassed a wealth of high-quality imagery and distinguished herself as an excellent photographer.

“From Altus, I was selected to become an aerial photographer for the Air Force Thunderbirds,” Machado said. “I moved to Nellis Air Force Base and was on the Thunderbirds for four years.” 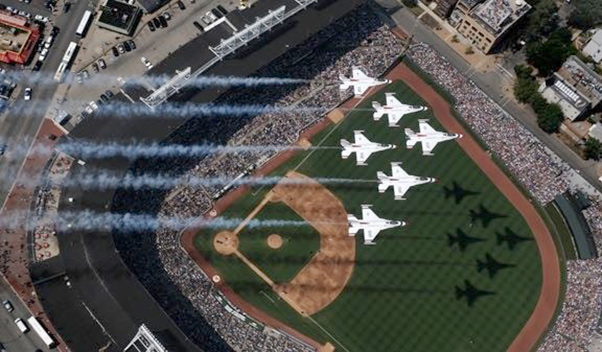 The U.S. Air Force Thunderbirds fly over Wrigley Field, prior to the start of their Friday practice for the Chicago Air and Water Show, Aug. 14, 2009. The Thunderbirds represent the nearly 700,000 active duty, Air National Guard, Air Force Reserve and civilian Airmen serving in the United States and overseas.

“I had a very, very unique perspective as a photographer that I hadn’t had before and haven’t had since,” Machado said. “Everyone who is on the Thunderbirds is selectively picked, so they are some of the best at what they do. We were the best choice at the time.”

The wide breadth of photographic experience offered to her by the Thunderbirds, working in immersive environments with a variety of different career fields, gave Machado a unique springboard to expand her career.

“I loved the people I worked with,” Machado said. “People who were passionate, and self-motivated, and who love the Air Force and the mission.”

Machado, who cherishes her time with the Thunderbirds as some of the best years of her career, was able to take this experience and share it in her next assignment as an instructor at the Defense Information School at Fort Meade, Md., where military photojournalists and broadcasters learn their trade.

“I knew I would like teaching, but I didn’t know I would love teaching,” Machado said. “I found I really had a passion for it and just opening students’ eyes to different possibilities and ways.”

Over the course of three years, Machado taught photography in the Basic Mass Communications Specialist Course for Navy students, and graphic design in the Digital Multimedia Course for intermediate prior-service students.

“I was around Navy and Marines all day,” Machado said with a laugh. “I had a great time with them and they became another family to me, just like the Thunderbirds did. I follow a lot of my students work and what they’re doing now and I’m so proud of them. They’re doing amazing things in amazing places and I just love that.”

Meanwhile, Machado reentered school, attending online classes from Savannah College of Art and Design. As a technical sergeant, in the midst of a full-time workload leading and instructing students of all skill-levels, Machado earned a Master’s degree in photography.

“At the time, as an instructor at DINFOS, we had the facilities and the ability to allow me to maximize my experience,” Machado said. “I was surrounded by studios I could go and practice my craft and learn in. I think the timing was just perfect for me.”

Altogether, her education, her expansive range of knowledge and experience, and her shining willpower and motivation made her application for selection to Officer Training School an easy package to build. What was not as easy, however, was saying goodbye to her life as a photographer. 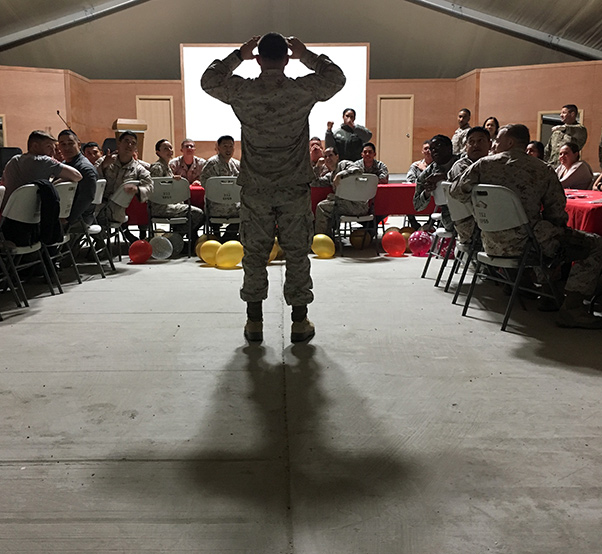 A U.S. Marine attempts to guess a mystery word, through clues given by his brothers and sisters-in-arms, during a monthly birthday celebration, 18 February 2017. Dinners such as these are often part of morale boosting events, while members serve in overseas locations.

“I was so thankful,” Machado said. “I loved it so much that it took me almost 10 years to finally follow my recruiter’s advice and put in an OTS package. I loved my job. I would not trade a day of it.”

Today, Machado is finishing her tenure as a services flight commander and will soon receive a new command assignment, potentially over a different set of career fields. Her time working with Thunderbird Airmen in numerous different jobs has given her ample exposure to the general range of possibilities.

“It’s a new opportunity,” Machado said. “I always enjoy being kept on my toes and getting to learn something new, deal with a new challenge.”

As Machado advances forward in her Air Force career, she can’t help but ponder the paths of those she’s had the chance to influence herself, both as a leader and a wingman.

“I’ll miss the Airmen that I’ve had the chance to work with and for,” Machado said. “I can’t wait to watch and continue to see how they grow.”