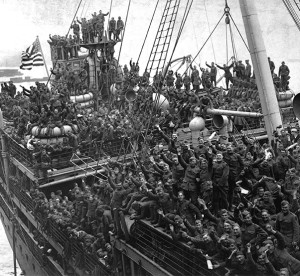 F.E. WARREN AIR FORCE BASE, Wyo. — It was 95 years ago at precisely 11 a.m., Nov. 11, 1918, the “war to end all wars” came to a termination of hostilities after the death and wounding of millions of veterans. One year later, President Woodrow Wilson proclaimed Nov. 11 as Armistice Day with this statement:

“To us in America, the reflections of Armistice Day will be filled with solemn pride in the heroism of those who died in the country’s service and with gratitude for the victory, both because of the opportunity it has given America to show her sympathy with peace and justice in the councils of the nations …”

As we know from history, the war to end all wars was followed by another world war. Following World War II, on June 1, 1954, President Dwight Eisenhower saw the need to expand the significance of Armistice Day and so signed legislation making Nov. 11, Veteran’s Day — a day to honor all American veterans.

While Memorial Day honors those who died in service to their country or later from wounds sustained during battle, Veteran’s Day is meant to honor all veterans, past and present, who served honorably in times of peace or war.

So, what does Veteran’s Day mean to you? Is it another day off from work, or is it more? To me, it represents a time to remember and be grateful for my brothers- and sisters-in-arms whom I have had the honor to serve with in peace and in battle. In doing so, I heed the words of Jewish American writer Cynthia Ozick who warned, “We often take for granted the very things that most deserve our gratitude.” Not only am I grateful for those I serve with, but for the common connection with my fellow veterans in that we all have answered our nation’s call to willingly put service before self.

Whether deployed-in-place or deployed in enemy territory, we all share this common bond of service, and I want to thank each and every one of you in uniform for what you do each day. Your service is what makes this country the home of the brave. It takes courage to do what you took an oath to do, to support and defend the Constitution of the United States against all enemies, foreign and domestic. Our mission depends on each of you staying true to this oath, no matter what occupational badge you wear. We must depend on each other to succeed in our individual areas of service.

So on this Veteran’s Day, I want to thank you, my fellow veterans, for enabling me to serve my country, my wing, and fulfill my mission and oath. Because it is you, my fellow Airmen, that most deserve my gratitude.

“This nation will remain the land of the free only so long as it is the home of the brave.”
— Elmer Davis