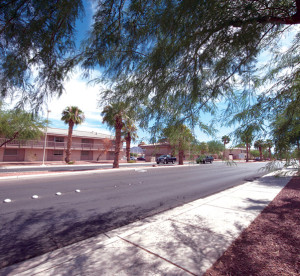 NELLIS AIR FORCE BASE, Nev. — The construction that took place here on Washington Boulevard — which began March 16 — was officially completed Sept. 11.
The construction project called “various intersections” was slated to finish on Oct. 12, but with hard work and diligence the project was completed about 30 days ahead of schedule.
“This project had a little more high-visibility because it was Washington, which is one of the main roads going through base,” said Steve Stone, 99th Contracting Squadron contract specialist. “The reason why we did the project was because with the previous configuration, the roads were just mixed asphalt. Out here in the west the extreme heat keeps the asphalt soft.”
Washington Boulevard has stop signs at numerous intersections, so when vehicles would stop at the intersections the asphalt would get pushed down causing dips and humps.
“It’s just a result of the material and where we live,” said Stone. “The fix for that was to close off those intersections and take up all the old asphalt and put concrete down. Concrete won’t cause dips or humps because it doesn’t flow the way that asphalt does. So by doing this we have eliminated that problem at two main intersections on Washington, essentially forever.”
Stone would like for people to know that more construction could take place at other intersections around base in the future, especially in the areas leaving base.
The total project cost was set at $812,634 and it included more than the two intersections on Washington Boulevard.
“Swaab Boulevard got repaved as well as a section on Tyndall Avenue,” said Stone. “The intersection on the corner of Tyndall and Ellsworth Avenue got paved as well.”
The project was a joint team effort between the 99th CONS, 99th Civil Engineer Squadron, and the contractor.
“The civil engineer squadron will come to us and say ‘this is what we need done’ and our job is to go out and find a contractor to make it happen,” said Stone. “The CES will give us the money. Then we find the contractor and build a contract to make sure that everything is fair and square. That way the contractor gets paid and we receive the work we’re contracting them to do.”
The 99th CES sent out an inspector every day to the job site to help ensure the job was coming along as scheduled.
“Once a week we would get a report from the contractor stating that this is what we did this week and the CES would look at it to verify that the work happened,” said Stone. “We pay them monthly based on the percentage of progress that they have made.”
On three different nights a week the concrete was poured from 11 p.m. to 7 a.m., due to the extreme daytime heat.
“During those three-night shifts, CE inspectors had to be there throughout the night with the contractors while they were pouring the concrete,” said Stone. “The add mixture was added to the concrete to prevent it from curing too fast in the heat which is why the concrete was a yellow or green color for the first few days.”
Once the concrete was poured, it needed to sit for 28 days and cure to reach full strength.
“The cones stayed up, the roads stayed closed, and nothing appeared to be happening because concrete needs to cure for 28 days before you can drive on it,” said Patrick Mock, 99th CONS contracting officer. “We wanted the contractor to grind up six inches of the old asphalt, but it was actually a foot thick. We didn’t know that.
“To keep this project on track, with as many things that were going on, was a good success on part of contracting and civil engineer squadron as well as the contractor.”