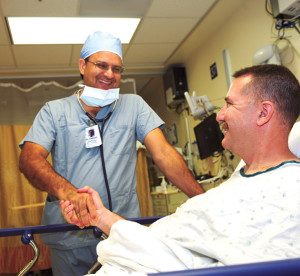 TUCSON, Ariz. — One out of 540 members of the C.W. Bill Young Department of Defense Marrow Donor Program ever proceeds to donate marrow or stem cells. However, an Airman from Schriever Air Force Base, Colorado, recently had the opportunity to be one of those donors.
In the early 2000s, Tech. Sgt. Bruce Davis was stationed at Royal Air Force Mildenhall, England, when he decided to register to become a potential marrow donor. It wasn’t until earlier this year that Davis was notified he was a match for a patient in need of a bone marrow transplant.
“I went to the nearest hospital at Peterson AFB, where they drew blood, tested it all, and it came back with good results,” Davis said. “The next step was to come back (to Tucson so) they could do more tests. They did a chest X-ray, drew more blood to (perform) a lot more lab work, and then scheduled the extraction. It goes pretty quick when they find out you’re a good match.”
After some final testing, Davis was in his hospital bed rolling down the fluorescently-lit hallway to the operating room where the marrow extraction was scheduled to take place. Davis was administered an anesthetic and moments later, he laid on the bed motionless. Doctors worked quickly to insert a breathing tube into his mouth so he could easily breathe while lying on his stomach.
The bone marrow was harvested from Davis’ hips using two needles placed in the left and right sides of his lower back. With the needles serving as taps, the doctors used syringes to extract about 1.5 liters of rich marrow, which is five percent or less of the donor’s total marrow cells, and transfer it to a collection bag. After processing, the marrow is transplanted to the recipient within 24 hours. 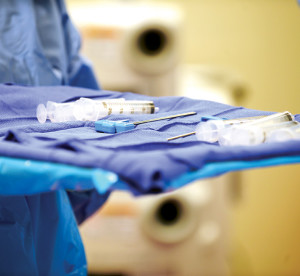 A nurse carries a tray of biopsy needles and syringes to an operating table during a bone marrow collection procedure at Banner-University Medical Center in Tucson, Ariz., July 2015. The needles are placed in the left and right sides of a donor’s lower back and are used to extract 1-2 liters of rich marrow from the hips.

Davis’ marrow extraction took place at Banner-University Medical Center in Tucson, Arizona, because one of its specialty services includes extensive cancer treatment.
“This hospital was especially cooperative and the staff was great,” Davis said. “They kept me overnight for observation and checked on me to provide a great experience.”
While comparing the marrow donation process to being as simple as attending a dentist appointment, Davis urges anyone who is able to become a registered potential donor.
“I just thought it was a good thing to do,” Davis said. “Just like donating blood, every time there’s a blood drive on base, you don’t know what your blood is going to be used for or who it’s going to go to. You just know there’s a need. There’s just as much of a need for marrow right now, it’s just less known.”
The C.W. Bill Young DOD Marrow Donor Program works exclusively with military personnel and their dependents, as well as DOD civilian employees, to facilitate marrow and stem cell donations.
There are several ways you can register to become a potential bone marrow donor. You can attend walk-in registration sites, hold your own drive or request a kit from the C.W. Bill Young DoD Marrow Donor Program. 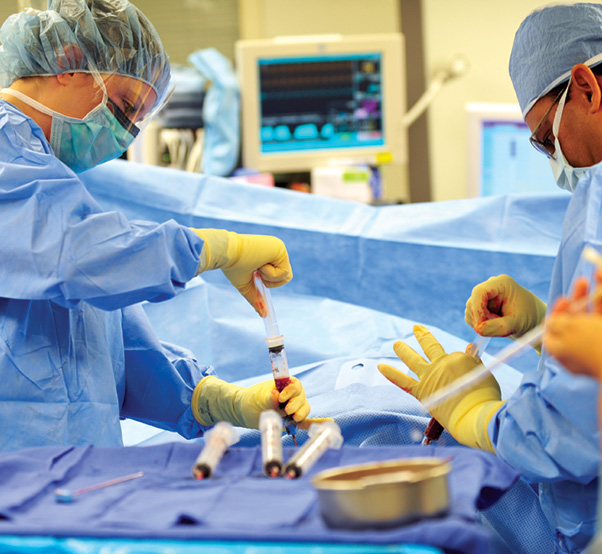