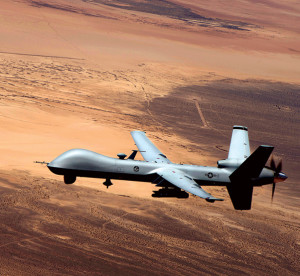 Between August and October of 2014 the Remotely Piloted Aircraft community participated in operations which provided aid to Iraqi citizens who were being threatened by the Islamic State of Iraq and the Levant on Mount Sinjar, Iraq. Overall, the airdrops, provided 682 bundles of supplies containing 362,212 bottles of drinking water, 116,316 meals, 1,008 tents and 1,124 lanterns to Sinjar, and 145 bundles, 96,226 water bottles and 12,137 meals to Amirili.

CREECH AIR FORCE BASE, Nev. — Between August and October 2014, the Remotely Piloted Aircraft community participated in operations which provided aid to Iraqi citizens who were being threatened by the Islamic State of Iraq and the Levant on Mount Sinjar, Iraq.
Overall, the airdrops provided 682 bundles of supplies containing 362,212 bottles of drinking water, 116,316 meals, 1,008 tents, and 1,124 lanterns to Sinjar; and 145 bundles, 96,226 water bottles, and 12,137 meals to Amirili.
The integration of the RPA community into the operations of the Air Mobility Command mission provided additional support before and after the mission operations, and delivered defense capability both for the aircraft and the bundles if they were to go off target.
With all the moving parts of the mission, the RPA crew had to be prepared for any issues that could arise.
“This was a way for us to ensure the AMC mission was a success with minimal risk to the airdrop aircraft,” said Lt. Col. Ryan, 15th Reconnaissance Squadron pilot. “We were able to provide them pre-drop and post-drop intelligence about the enemy situation, the condition of the drop zones, and whether all the humanitarian relief bundles made it to the intended targets.”
The crew arrived on station in Iraq early to scout out the landing area for the drop and to make sure there were no enemy forces on the ground or around the area.
“We provided intelligence, surveillance and reconnaissance for the leadership as well as the ground party so everyone could see, from our view, what was going on during the operation,” said Staff Sgt. Eirik, 15th RS sensor operator.
After the target area had been searched, the crew would look for the friendly forces on the ground near the drop zone.
“We would look for where the enemy forces were to see if they were encroaching on the drop zones,” Ryan said. “During the drops, we would be stationed so we could see the bundles parachuting into the drop zone while also being in a position to suppress any fire at the airdrop aircraft or the friendly forces. After we confirmed that all the bundles made it into the drop zone, we would check out the condition of the bundles and watch to make sure it was the friendly forces who picked it up.”
With surroundings always subject to change, the mission intelligence coordinator had to gather extra information about the droops and coordinate with the proper supporting unit.
“In order for the drop to be successful, the supported unit told us we needed to be able to confirm no enemy forces were nearby, have eyes on the drop location, and be able to interdict any enemy forces that attacked or tried to steal the supplies from the Yazidis,” said Senior Airman Alexander, 15th RS MIC. “If we were unable to confirm the area was safe they would have most likely not have dropped the supplies due to the risk of the dropping aircraft.”
Ryan said he believes that the airdrops executed helped stop a planned genocide of the 40,000 Yazidi people trapped on Mount Sinjar.
“If they came down from the mountain they would be executed and if they remained on the mountain they would starve,” Ryan said. “By providing thousands of meals and water to the refugees, these airstrikes sustained the population until the Kurdish forces, backed by Iraqi and allied airpower, were able to break the siege.”
Ryan said the efforts also protected the population in Amirli and sustained the isolated Iraqi force in Bayji.
“These campaigns not only helped blunt the forward progress of ISIL, but also demonstrated the Iraqi government’s commitment to helping minority populations throughout Iraq,” he said.
Eirik said being able to be part of the airdrops that provided people on the ground with life-saving supplies was an amazing accomplishment.
“Words can’t really describe how it feels,” he said. “These air drops were so vital for the lives on the ground, providing them with live-saving supplies. Our community as a whole is willing to do what it takes to save as many lives as possible, doing air drops being a small part in that. At the end of the day, you are just happy you can contribute in any way possible to saving lives.”
As with any new integration process, there are always challenges to face. However, with dedication and team work, the RPA community was able to aid in the relief of thousands of people.
“This was a success story of captains and airmen,” Ryan said. “In the midst of combat, these young pilots, sensor operators, and intelligence professionals figured out how to integrate two platforms (RPAs and airlifters) who hadn’t really worked together before. It’s this type of bottom-up innovative thinking that sustains the proudest traditions of the U.S. Air Force.”