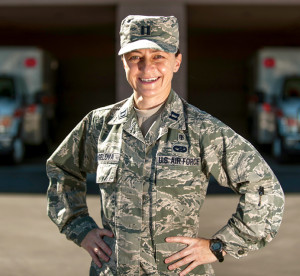 Capt. Reni Angelova, 99th Medical Group practice manager, poses for a picture outside of the Mike O’Callaghan Federal Medical Center on Nellis Air Force Base, Nev., Oct. 7. Angelova speaks Russian, Bulgarian and English while possessing master’s degrees in economics, law, business administration as well as international relations. She has worked as a teacher and a border patrol agent at one of the busiest checkpoints in Bulgaria before immigrating to the United States. She recently served in the Office of Defense Coordination in Bulgaria as an interpreter under the Language Enabled Airman Program.