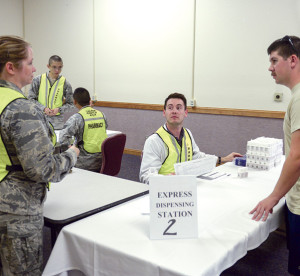 Participants in a public health exercise stand near a point of distribution station at Nellis Air Force Base, Nev., Sept. 30. The 99th Medical Group conducted a public health exercise on base with local partners in the Clark County area which tested each participant in how they would respond to contracting or deal with individuals who contracted aerosolized tularemia, a serious infection disease which can be used as a biological warfare agent.

NELLIS AIR FORCE BASE, Nev. — The 99th Medical Group conducted a public health exercise here with local partners in the Clark County area which tested each participant in how they would respond to contracting or deal with individuals who contracted aerosolized tularemia, a serious infection disease which can be used as a biological warfare agent.
The exercise, which was conducted from Sept. 29 through 30 and was coordinated and conducted by Nevada state public health officials, began in the Las Vegas community before spreading to Nellis Air Force Base.
“This was a city-wide exercise conducted to see the capabilities of the city in response to a city-wide epidemic. The goal of the exercise was to evaluate the response from the public health officials and hospitals,” said Capt. Huette Wong, 99th Medical Support Squadron satellite pharmacy chief. “They needed to identify the disease and then take the correct steps to ensure disease containment. The exercise utilized base resources and city/state resources to contain the epidemic. Our specific part was conducted so our point of distribution capabilities could be practiced.”
Although Nellis AFB conducts numerous exercises throughout the year, this type of exercise happens once every five years, said William Richardson, 99th Civil Engineer Squadron Readiness and Emergency Management Flight member.
“99th Medical Group Public Health Emergency Office conducts PODs quarterly; however, a full scale exercise of this nature in coordination with the State of Nevada Public Health Division and the Southern Nevada Public Health District usually only happens once every four or five years,” said Richardson. “Over the years here at Nellis AFB, we have pretty much mapped out the typical threats we face day to day and we have training and equipped the (Emergency Operations Center) for those types of responses.
“This was different, the incident, according to the scenario happened over the weekend, and we were only just finding out about it. The people exposed to and potentially contaminated would require immediate treatment, but there were preliminary checklist conditional items to be completed before we could start contacting our people.”
Richardson said he was impressed with how each participant responded and worked together during the simulated crisis.
“The professionalism of everyone involved was impressive; from the emergency operations center to the POD activation to the inspection team members,” Richardson said.
Wong said now that the Nellis AFB team has worked with its civilian counterparts, she believes the base, and city of Las Vegas, would be well-prepared for a real-world public health crisis.
“I think our POD went great; we were able to set up a site and we were able to get the POD up and running within a couple hours,” Wong said. “This was out first time working with the strategic national stockpile. They were able to transport a secret package of medications and we were able to receive and process those medications. I feel that if we were put in a real-life situation we would have a very good process and idea of what to do. It was great that we were able to practice with the rest of the city.”