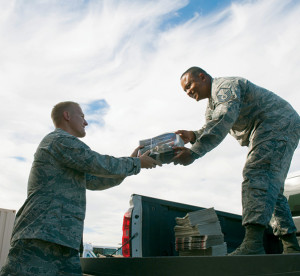 NELLIS AIR FORCE BASE, Nev. — The 2015 Combined Federal Campaign kicked off here Sept. 1 and is scheduled to wrap up Dec. 15.
The CFC is an annual workplace charity campaign that helps support eligible non-profit organizations that provide benefits throughout the world.
“The CFC is an entity that combines all of the approved charities under one umbrella so that all federal employees, military and civilian, can donate to any type of organization that appeals to them,” said 1st Lt. Benjamin Brabec, 99th Civil Engineer Squadron engineering operations chief. “The organizations are sorted into categories such as people, animals, and many more.”
The CFC is one of the world’s largest and most successful annual workplace charity campaigns.
“The CFC is our once-a-year volunteer opportunity to personally choose those charities which we feel offers the most benefit to our service, communities, and families,” said Col. Richard Boutwell, 99th Air Base Wing commander. “As military and civilian members we are afforded a rare opportunity to take the lead in showing the world that charity begins at home.”
Having campaigns like the CFC give individuals the chance to help make a difference in the lives of others.
“The CFC is important because it allows people to make a difference outside their work area and the base. It allows people to make a difference in the community and even across the world,” said Brabec. “There are charities that you may not have realized were in your local community or even on base. It really helps open your eyes to a lot of different ways that you can help others.”
Rather than focusing on a set installation goal, the installation CFC representatives set an awareness goal.
“We set an awareness goal for our unit, squadron, and group reps to achieve 100 percent contact and awareness with each individual, military or civilian, in their units,” said Brabec. “We want them to help others understand the CFC, make decisions, and teach them how they can make a difference.”
Brabec hopes people learn about the CFC and take away an understanding of how they can help others.
“I hope people take away that there are some charities that really hit home with other people and I hope that they find a charity that helps with a topic that they’ve had personal life experience with,” said Brabec. “Then people can make a decision if they can financially donate or not. I’d rather people be more informed about what they care about, what they want to make a difference with and being aware of how they can help.”
Even though Nellis Air Force Base’s campaign will end Dec. 15, donations will still be accepted after the cut-off date.
Airmen, contractors and civilian employees are encouraged to donate to the charity of their choice during the 2015 CFC. For more information about the CFC or how to donate, contact a unit CFC representative or visit nevadacfc.org.