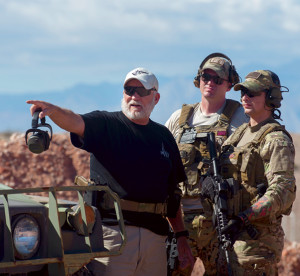 NELLIS AIR FORCE BASE, Nev. — The year is 1974. The Vietnam War is on its way to an end after almost 15 years of fighting. The U.S.Air Force was trying to give America the upper hand.
Also in 1974, a young man named Paul Koester decided that he wanted to join the world’s greatest Air Force.
Originally from Colorado Springs, Colorado, Koester planned on serving four years as a jet engine mechanic and that would be it. But during basic training, that thought would never become reality.
While in basic training, individuals from Pararescue came to Koester and fellow trainees to see if they would be interested in becoming a Pararescue Airmen. He took physical training tests which included swimming to see if he was cut out for the job. After barely making it through, it was on to the training pipeline for the young Airman.
“Back then, the pipeline was a year-and-a-half, now it is two-and-a-half (years). All the schools they are going to throw at you jump, dive, weapons tactics and survival to make sure you are fully prepared,” Koester said. “That has not changed one bit, if anything it has gotten better. They do a great job of weeding out the people who aren’t cut for the job and what comes out of that school house; those guys are ready for the pipeline.”
After successfully completing his training, Koester was sent to Elmendorf Air Force Base, Alaska to start his career as part of the 71st Aerospace Rescue and Recovery Squadron. After serving over four years at Elmendorf AFB, he was credited with saving over 75 lives.
For the next six years from 1980 to 1986, Koester served at McClellan AFB, California, and Little Rock AFB, Arkansas, before he met his wife, Stacey.
“I was in the Air Force for almost 10 years before I met Stacey when I was stationed at Pope (AFB, North Carolina) at the time,” Koester said. “I made the decision to leave active duty and join the Air National Guard. I wanted to finish graduate school, I wanted to live a normal life and settle down. We moved to Annapolis, Maryland, started our family, and I maintained my career by working weekends in the Guard.”
From 1987 to 2003, Koester served at Francis S. Gabreski ANG base in New York where he was a part of the 102nd Rescue Squadron.
“I had a few deployments from 1997 to 2002, and of course in that time 9/11 hit,” Koester said. “It was a game changer for everybody. Our team responded to the World Trade Center; we were some of the first guys on the ground and we spent about 26 hours there.” 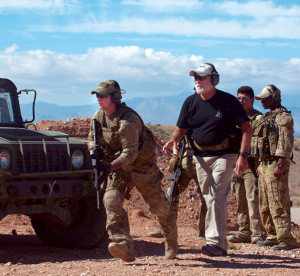 Retired Chief Master Sgt. Paul Koester, 58th Rescue Squadron chief enlisted manager, shadows an Airmanparticipating in a training scenario Oct. 22 at Nellis Air Force Base, Nev. At the time of his retirement, Koester was the oldest enlisted member actively serving in the Air Force, as well as the longest serving Pararescue Airman in history.

With the collapse of the World Trade Center, Koester and his team worked tirelessly trying to find anyone who survived the building collapse. Koester and his team were credited with pulling out the last survivor that dreadful day in New York City.
“After 9/11, I came back home and I had to drive past the Pentagon going back to Annapolis,” Koester said. “Three weeks later to the day, we were over on the Kuwait/Iraq border doing Operation Southern Watch. After that I came back home and said it’s time for a change.”
After returning home from his deployment, Koester and his family wondered what would happen next. With 9/11 kick starting the war on terror, Koester either was on duty with the Guard or at his part time job — until deciding to return to active duty.
“I called up the career field manager at the Pentagon and said ‘I think it’s a good time to come back in (to active duty),’” Koester said. “Thirty days later, we had orders to Nellis in March of 2003. In 2005, I deployed to Afghanistan and have been going back ever since.”
When coming back to active duty, Koester came to Nellis AFB, where he was a part of the 58th Rescue Squadron, and concluded his long career in 2015.
With Koester’s now at 41 years of service, he notice Airmen that he works with on a daily basis can be considered his kids.
“At my age, most of the Airmen that I deploy with are younger than my kids,” Koester said. “So that is kind of different; and you look at them like they are your own kids, extremely professional at what they do and great guys to deploy with. Some probably look at me as a father figure and I’m fine with that.”
With his combined service years totaling 41, Koester says the biggest challenge he has faced is balancing his two families.
“You’ve got your wife and kids at home that hear a little bit about it, see it on the news, but they really have no idea what you are going through and we don’t want to share most of the because of the sensitive stuff that we do,” Koester said. “And then you have your military family. Especially as a senior NCO, you have a full plate. You have a group of Airmen that look to you to take care of them when you’re deployed. And the best part is having that responsibility. That is the most rewarding part of having the job.”
With retirement in the books, Koester says he will miss the Air Force and deploying down range, but enjoys the time he gets to spend with his family.
“It’s great coming home at a regular time,” Koester said. “I’ve got two kids that have moved back home for the short term and I have a grandson in the house, so it’s nice to have a normal routine and I don’t have to deploy which is great, and on the other hand, I don’t get to deploy again, and that’s probably the one downside which I definitely will miss.” 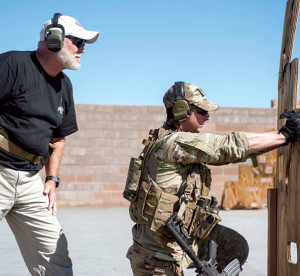 After recently celebrating his 60th birthday, Koester was the oldest enlisted member actively serving in the Air Force as well as the longest serving Pararescue Airman in history with 13 deployments throughout his illustrious career.
“I am honored beyond belief to have the opportunity to preside over this retirement ceremony,” said Gen. Hawk Carlisle, 99th Air Combat Command commander, who presided over Koester’s retirement ceremony. “Chief Koester is much too humble of a man to admit this, but very few people serve long enough to actually witness their legacy in the Air Force and Chief Koester will be able to do that.”
“I will tell you in my humble opinion, I believe that our PJ’s in particular are probably the top two or three most highly trained and skilled members of the entire United States military and it speaks to what Chief Koester has been through in his life and what he has done,” Carlisle said.Koester plans to skydive in his free time, conduct firearm training for military members, as well as gunsmithing — which he has been doing since 2006.
During his retirement ceremony, he also left his battlefield airmen one last message.
“We are the outliers when you look at the overall mission of the Air Force. I use to have a very specific task, ‘kill the enemy, destroy the ability to fight, save American lives, and bring them home to their families,’” Koester said. “That hasn’t wavered since I came in in 1974, we are still here for that very same reason and battlefield airmen do it the best, no question about it.”