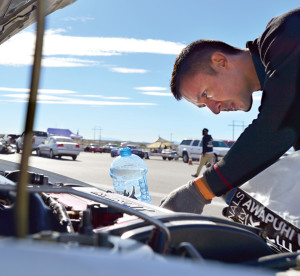 CREECH AIR FORCE BASE, Nev. — During the day he sits in a cushy, thick seat in a ground control station flying yet another eight-hour sortie in a remotely piloted aircraft, the MQ-9 Reaper. By night he sits in a thin, lightweight racing seat harnessed into a raw, stripped out track monster.
He is Tech. Sgt. Gabriel, 432nd Wing/432nd Air Expeditionary Wing sensor operator and junior executive officer. Gabriel, a soft-spoken Texas native who seems to find his voice with his love of cars, racing, and the raucous roar of his heavily-modified Mitsubishi Lancer Evolution VI.
Gabriel enlisted in the Air Force in 2004 as a C-130 Hercules crew chief. In 2011, he made the decision to cross-train to be a sensor operator for the Reaper.
“I was still a first term Airman and the sensor operator career field was in high demand and was very different than what I was doing,” he said. “Just the idea of seeing a different aspect of the Air Force and giving myself a broader spectrum of what it does made me decide to open my eyes to another field.”
Now as a sensor operator, he controls the RPA multi-targeting system ball and camera to conduct intelligence, surveillance, and reconnaissance as well as weapons guidance in support of U.S. and joint operations around the world.
“I love my job even though it can be highly stressful,” he said. “We’re flying three to four times as many hours compared to manned aircraft and we’re also flying combat lines on rotating shifts continuously for years sometimes.”
The RPA enterprise is at war every day, fighting long hours on changing schedules sometimes missing time with family. The Airmen are charged with bringing a combat mindset to work and then leaving it at the base gates to return home.
“Despite the many stressors, I’ve enjoyed the sensor operator career field so far. I go to work and see things many others don’t ever get to and knowing I have that experience is something special to me,” he said. “What I appreciate most about my job is being able to support the military members on the ground and make sure they can go home to their families.”
After a long day of sitting in a quiet GCS, Gabriel has his passion waiting when he pulls in his driveway. No matter what he may have seen that day, it all fades away when he opens the hood of his Evo, cracks open the toolbox, and tackles the next upgrade or repair.
“I feel like the racing and working on the car centers me,” he said. “I’ve done most of the work myself except for the motor and assembling it, every other part was me, suspension, brakes, safety, and interior. The whole car and track scene is a great release for me.”
His car represents a culmination of five years spent pouring himself into his car and preparing for his love of racing. Each night his garage is home to the sound of the clicking socket tools, metal clinking together as he trades one tool for another, and the occasional dropped bolt hitting the concrete. 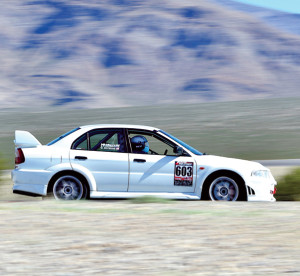 “When I got the car it was mostly stock, it just had a few minor upgrades such as the brake lines. Since then there’s not a part of it that I haven’t touched other than the body,” he said. “I started off with brakes, pads, two-piece rotors, full coil-over suspension setup, fully built motor with a bigger turbo which puts down about 430 horsepower to the wheels, and the last thing I did was get the car fully caged and upgraded all the safety equipment to be fully ready to go as a track car.”
Gabriel has set his Evo up for a style of racing called time attack, which involves multiple sessions of different classes of drivers racing against the clock to see who gets the best time. In preparation for his first competition, he attended a track day in California in September to test the new setup on his car.
“Last month was my first event and it was mostly a shakedown, getting used to the car since this is a completely new setup,” he said. “It was a great time so hopefully I can adapt and get on the podium for the street class within the next year, even though I’m at a bit of a disadvantage compared to some of the drivers who have been competing and have known the tracks for years.”
When the day for his first competition arrived over Halloween weekend, Gabriel was ready to attack the track.
He pushed his car and himself to the limits, again and again, shaving seconds off of his times with every session, the only thing on his mind, going faster than the last time. Slowed only by traffic, Gabriel adapted not to, but with the car, appearing to be at home on the track.
“There’s nothing else that can bother you when you’re on the track and have the throttle pinned,” Gabriel said. “For that time, you’re one with the car and moment and untouchable to any other worries. You’re free for that time; at least that’s what it does for me.”
He competed in the high intermediate class claiming second place at the end of the weekend. Starting with a lap time in the 2:20’s he whittled his time down to 2:08 around the 2.8 mile course, that time rivaling those in the next and highest class.
“Overall I’m happy with my time and the event was a blast,” he said. “I could have made up some more time but I’m getting more familiar with the car and I look forward to the next event.”
He exceeded his goal, claiming a podium spot in his first-ever competition, leaving him satisfied, yet eager for his next taste of competition. Until then, Gabriel will continue to fly the MQ-9 in support of global operations while working on his car when he can.
By day he sits right-hand drive in a GCS saving lives, by night he sits right-hand drive in a racecar balancing himself to be a stronger leader, Airman, and driver. 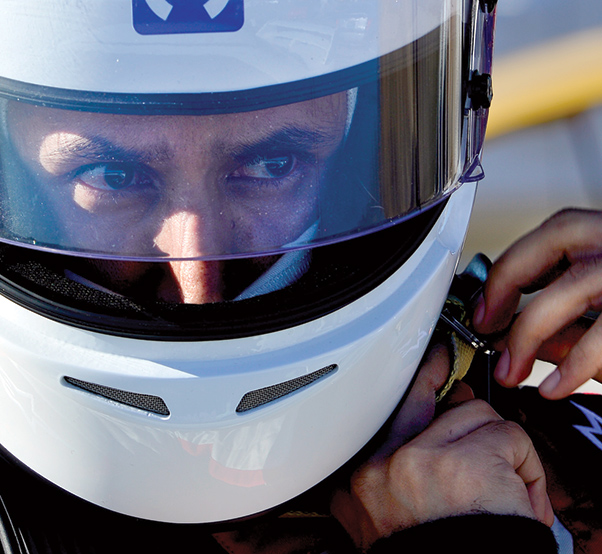 Tech. Sgt. Gabriel, 432nd Wing/432nd Air Expeditionary Wing MQ-9 Reaper sensor operator, puts his helmet on before racing his Mitsubishi Lancer Evolution at the Spring Mountain Raceway in Pahrump, Nev., Nov. 1. Gabriel balances his life between a highly stressful, yet rewarding career, with his passion for cars and racing.