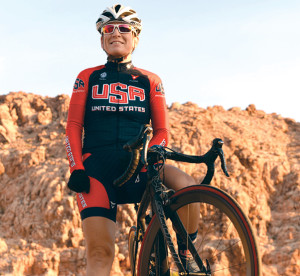 Maj. (Dr.) Shannon Gaffney, 99th Medical Group staff radiologist, poses for a photo before riding her bike through the Calico Basin in Las Vegas, Nov. 18, 2015. On Oct. 6 and 8, 2015 Gaffney raced as a member of the U.S. Armed Forces Cycling Team during the Military World Games in South Korea. Gaffney was the top U.S. finisher in the women’s cycling road race.

NELLIS AIR FORCE BASE, Nev. — Several thousand miles away from her usual terrain, Shannon Gaffney found herself racing against some of the world’s top athletes in a 45-mile road race and timed trial though Mungyeong, South Korea as part of the U.S. Armed Forces Cycling Team during the Conseil International du Sport Militaire (CISM) Military World Games.
The CISM Military World Games is a multisport event held every four years and one year before the Olympic Games. This past October, approximately 100 countries, and 7,000 military athletes and delegates participated in 24 sporting events.
It wasn’t until six years ago that Gaffney, a U.S. Air Force major and staff radiologist assigned to the 99th Medical Group, decided to take up cycling.
“I dated somebody who bought me a bike,” said Gaffney. “He bought a very expensive bike. He thought I would be a good cyclist and I actually hated it at first and never really wanted to use that very expensive bike. It took me three years of that bike sitting in the house to finally decide.
“The guilt of that bike sitting there and a hamstring injury led me to finally say ‘let me try to bike instead of run.’ I said I’ll give it two months, seriously dedicate myself to biking and see if I like it. Soon after I made that commitment, I met a bunch of fast cyclists and was determined to be as good as them.”
Gaffney’s dream came to fruition when she received a call in July 2014 from the coach of the U.S. Armed Forces Cycling Team.
“He told me about the event and asked if I wanted to submit an application,” said Gaffney. “I was like ‘Uh, sure where can I fill this out?’ So I did, and got selected for the team and everything kind of unfolded from there.”
Gaffney had a mixture of feelings leading up to the event.
“There was tons of excitement and feeling very proud to be able to wear red, white and blue, representing the U.S.,” said Gaffney. “But, there was a lot of anxiety thinking about the competition. We had heard there was going to be a lot of strong athletes, Olympians, and pro-racers. So there was tons of nerves and I didn’t know anyone on the team.
“There were two races that I did,” said Gaffney. “One was a 45-mile road race that was amongst all the women, and then there’s something called a time trial which is an individual race against the clock and I think that was 12 or 14 miles. I placed 7th in the individual time trial and 11th in the road race.” 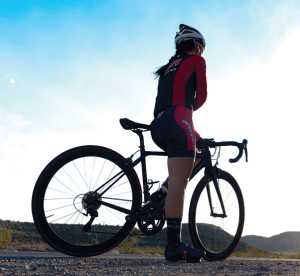 Back home at Nellis Air Force Base, Nevada, Gaffney often rides 250 miles a week.
“I probably train more than I need too. I like to do something almost everyday. Some days I’m out just peddling around but I try to train seriously at least five days a week.”
Gaffney usually starts her training around 6 p.m., after a 12-hour day at work.
“Sometimes I can be tired,” said Gaffney. “So starting to train at that hour can be difficult. The good thing is I’ve got people to go with me a lot of the time. This time of year you have to have lights and cold weather gear and that’s an issue in and of itself.”
For Gaffney, staying busy is enjoyable and needed.
“I think that being really busy is what allows me to do good things and stay focused,” she said. “When you actually have more time, you maybe tend to be lazy. So I try to fill my schedule as much as I can.”
According to Lt. Col. Nathan Cecava, Gaffney’s superb character and rigorous work ethic are the basis for her success — not only in competitive cycling, but also in her stellar career as a U.S. Air Force officer, physician, and radiologist.
“Her dedication to patient care is second to none,” said Cecava. “She is possibly the hardest working physician at the 99th Medical Group, sacrificing her personal time, and going the extra mile for her patients and for the Air Force mission. Her cycling prowess is so amazing because she trains solely on her personal time with no financial or coaching support. I believe she was a unique competitor at the Military World Games. It is unlikely that many competitors have the rigorous clinical and academic demands of being a physician.
“Her competitiveness and fitness already had set an incredible example for our workplace. However, after her designation as a Military World Games competitor, I believe her drive for excellence will inspire Airmen far and wide. We are extremely proud of Dr. Gaffney and her accomplishments.”
According to Gaffney, she often looks to incorporate the Air Force core values into her day-to-day work ethic as well as her training.
“The core values coincide with how I think everything should be done,” said Gaffney. “Especially excellence in all we do. I just try to give everything my best and it definitely helps when other people have that same mindset of trying the best that they can do.”