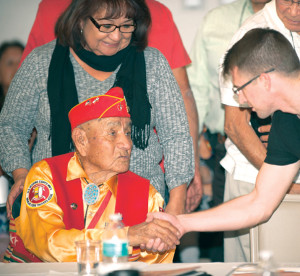 Former U.S. Marine Corps Navajo Code Talker George Willie shakes hands with a grateful audience member during the Native American Heritage Month Meeting at Nellis Air Force Base, Nev., Nov. 19. Willie was accompanied by his wife and two of his daughters who helped to tell the story of his service in the Pacific theater during World War II.

NELLIS AIR FORCE BASE, Nev. — Members of the traditional Native American community joined senior leadership in gathering here Nov. 19 to reflect on their past, address concerns for their future, and recognize the efforts of one of their most outstanding surviving members — a veteran of World War II and a national treasure.
After the day’s pressing topics had all been addressed, the group concluded their annual conference by welcoming George Willie with a standing ovation that could be heard echoing out the door and through the halls of The Club at Nellis Air Force Base.
Dressed in gold silk under a brilliant red vest emblazoned with commemorative pins and ribbons of his era, Willie was assisted into the room accompanied by his wife and two of his daughters. He sat in his chair and acknowledged the group with a humble wave. He wouldn’t be talking today.
The Japanese carried out the surprise attack at Pearl Harbor that finally forced the U.S. into global conflict on Dec. 7, 1941; when Willie was looking forward to his 16th birthday. His daughter, Anabelle Small Canyon, took to the podium on his behalf and explained how her father had joined the U.S. Marine Corps soon after his 17th birthday and became a part of the vitally-important Navajo Code Talker program.
“With my notepad and pencil I waited for dad,” she said, explaining to listeners that her father only recently began telling bits and pieces of his World War II story.
His daughters were unaware that he had been anything other than a hardworking farmer and dad all of his life until they found documentation from his honorable discharge from service and started prying.
“Bits and pieces of various environments would set him off, sort of like triggers, and he would just start talking,” she said.
Cooking outside on a fire, the sound of a helicopter overhead, war movies, and catholic priests are all examples of stimulus that would get him to spill the beans after all these years.
As a Navajo Code Talker, Willie was part of a top secret Marine Corps recruiting program that aimed to integrate bi-lingual Navajo radio operators into combat units using Native American code words to guarantee communications security. The Japanese showed they were very adept at cracking U.S. codes and the Navajo solution became an integral driving force to victory in the Pacific.
After enlisting in 1943, Willie went on to graduate from the program and took part in direct conflict throughout the Pacific theater, the most notable event being the bloody invasion of Okinawa in 1945. There, Willie demonstrated great physical fortitude, demonstrating his mastery of more than 420 codes in one of the most hostile environments ever encountered by U.S. forces.
Prior to the detonation of the atomic bomb in Nagasaki, Willie served out an assignment there as well. He is one of very few Americans alive today to have witnessed the immediate aftermath.
Willie believed the program was classified for years after he returned home to live life as a family man and farmer. Always a faithful Marine, he said nothing of his involvement in the war and continues to say very little, even after the program was declassified and he began attending regular Navajo veterans reunions in New Mexico.
“The tribes are a very patriotic people,” said Kish Lapierre, 99th Civil Engineer Squadron archaeologist and event organizer. “For this man to make the trip here and share his story with our people is a great honor for us all.”
Of the 400 original Navajo Code Talkers recruited during the war, Willie is believed to be one of only 20 who are alive today.