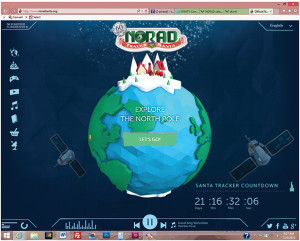 PETERSON AIR FORCE BASE, Colo.—The North American Aerospace Defense Command is celebrating the 60th anniversary of tracking Santa’s Yuletide journey.
The NORAD Tracks Santa website launched Dec. 1. It features Santa’s North Pole Village, which includes a holiday countdown, games, activities and more.
The website (http://www.noradsanta.org/) is available in eight languages: English, French, Spanish, German, Italian, Japanese, Portuguese and Chinese.
Official NORAD Tracks Santa apps are also available in the Windows, Apple and Google Play stores, so parents and children can count down the days until Santa’s launch on their smartphones and tablets. Tracking opportunities are also offered on Facebook, Twitter, YouTube, and Google Plus. Santa followers simply need to type “@noradsanta” into each search engine to get started.
This year, the website features the NORAD headquarters in the North Pole Village and highlights of the program over the past 60 years.
Tracking Santa’s flight
Starting at 2:01 a.m., EST, on Dec. 24, website visitors can watch Santa make preparations for his flight. NORAD’s “Santa Cams” will stream videos on the website as Santa makes his way over various locations. Then at 6 a.m., EST, trackers worldwide can speak with a live phone operator to inquire as to Santa’s whereabouts by dialing the toll-free number 1-877-Hi-NORAD (1-877-446-6723) or by sending an email to noradtrackssanta@outlook.com.
Any time on Dec. 24, Windows Phone users can ask Cortana for Santa’s location, and OnStar subscribers can press the OnStar button in their vehicles to locate Santa.
NORAD Tracks Santa is possible, in large part, to the efforts and services of numerous program contributors, NORAD officials said.