Tech. Sgt. David, 432nd Maintenance Group contract officer representative, poses for the judges of the 2015 National Physique Committee National Bodybuilding Championships in Miami, Fla., Nov. 21. David took first place against 27 other competitors in the middleweight class and 177 others overall taking second in the national competition. By winning his weight class, David received his International Federation of Bodybuilding and Fitness professional card, a dream he’s been chasing for six years.

CREECH AIR FORCE BASE, Nev. — There he was standing on the 2015 National Physique Committee (NPC) National Bodybuilding Championships stage, Nov. 21, 2015, in Miami, Florida, in front of thousands of people.
With the blazing spotlights on him, the announcer read off the winners, which is when he heard his dream come true.
“And taking second place, your new IFBB (International Federation of Bodybuilding and Fitness) pro card holder, David,” the announcer bellowed into the microphone.
The technical sergeant, a 432nd Maintenance Group contract officer representative, felt his stomach drop, his legs quiver, and a wave of emotion wash over him as he walked up to receive his award, realizing the past six years had paid off, earning him his life-long dream of becoming a professional bodybuilder.
“The moment I received my pro card meant everything to me,” he said with a proud smile. “I remember hearing the announcer read my name as a new IFBB pro and the feeling was indescribable. It’s something I had been chasing for so long and it’s unexplainable; it’s been a life-long dream.”
The long journey began as a young child in the small town of Fort Mitchell, Alabama.
“Every day l looked at bodybuilding magazines as a kid,” he said. “I was amazed how they could get their bodies to look like that and I knew even at a young age that it took a lot of hard work because you don’t see people walking around looking like that. I knew that it took a special kind of person, and I knew that I wanted to be that type.”
Through his school years he wasn’t the wide, intimidating man he is today; he was actually a small guy, only 5 feet 6 inches tall and weighing 135 pounds until he joined the military in 2001.
“In 2002 I was on a deployment when I first found the gym and my body took well to it,” he said. “I made the decision then that if I couldn’t get taller; I was going to get wider. From that day I focused on putting muscle on with competing in the back of my mind.”
David kept training in the gym, but it was only just to train until he met Kevin Sterling while stationed at Hickam Air Force Base, Hawaii, in 2009.
“Kevin was a huge bodybuilder in Hawaii at the time and he would see me in the gym a lot,” he said. “One day he asked me why I was training and I didn’t have an answer for him. He told me I should compete and show everyone what my dedication, hard work and sacrifices looked like, and it made a lot of sense.”
Shortly after listening to his friend, David competed in his first local show placing second in 2010.
“I looked horrible, but from there I got bit by the bodybuilding bug,” he said. “From then on I just started chasing after the pro status.”
With desire in his eyes and determination in his soul, he lusted after becoming a pro body builder. He competed in numerous regional events until this past July when he competed in his first national event, the 2015 USA Bodybuilding Championships. 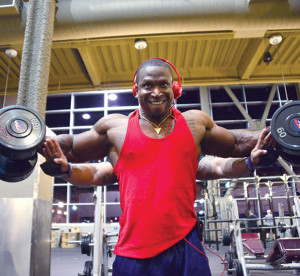 “Back in July I did the 2015 USA bodybuilding championships and took 2nd place,” he said. “Unfortunately in that one I had to place first to become a pro. I was still pretty hungry and I was still chasing that dream so I set my sights on the competition in November.”
David’s journey was not without hardship, during his contest preparation for the USA championships, his oldest sister passed away. He flew to San Antonio and spent two weeks with his family. Missing two weeks in bodybuilding can be devastating but he bore down, trained hard, and still took second place.
“My sister was sick, she had lupus, high blood pressure, and diabetes so she was on a lot of medication and she died in her sleep from all of it. She went peacefully but it did affect me a lot,” he said quietly.
He considered not competing and taking some time off, but he knew his sister would have wanted him to continue.
“She knew how bodybuilding is my life and she would have wanted me to keep going so I focused on the show and got it done,” he said. “Even though it was difficult getting back into it after her passing, I would think about the good times with her and I thought about her all the way up to the show and it really helped me pull through.”
Not only was this tragedy difficult, but combined with very little sleep due to three training sessions a day and his second job as a security guard, his stress was heightened.
“Every minute of my day is spoken for and especially with cutting my calories in half, the only thing that keeps me going to my third workout after my second job when I feel like I’ve got nothing left is my kids and my will to be the best,” David said.
These sacrifices finally paid off when he took first in the middleweight class against 27 other competitors and second overall against 177 others in the national competition.
David isn’t taking any breaks; he’s hitting the ground running by preparing for the New York Pro Bodybuilding Championships May 12, 2016. Because there are only two weight classes in professional body building, under 212 pounds and over 212 pounds, Robinson will need to put on at 14 pounds of clean muscle to be competitive. Not only is this a challenging feat, but he will also need to defeat one of his idols, Flex Lewis, in his pro debut.
His sacrifices not only help him on his quest to becoming a legend in his sport, but they also help him perform better in the military.
“Bodybuilding to me is a stress reliever, whether it’s lifting or posing practice, they all help me relieve stress,” he said. “There’s a lot of stress that comes with the job but I don’t take them home with me, I take them to the gym and I take it out on the weights and I come back to work the next day ready to go.” 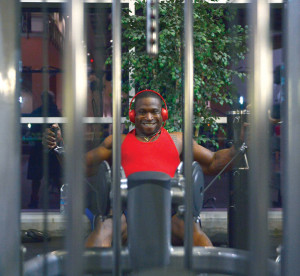 Taking his stress out on the weights allows him to stay in control even when his shop is undermanned and underappreciated.
“We have 13 members and five sites that we manage, two overseas and three stateside, so we’re always going TDY.  It is usually short to no notice, to inspect the work of those contractors which is another thing which adds some stress because we’re inspecting people we hardly see,” he said. “When you factor in people’s leave and the fact that we still deploy our numbers get smaller but the workload doesn’t get slower.”
He went on to say having his leadership at a different base can cause some tension because the interpersonal relationships are difficult to establish and for that reason, when weekly suspense’s take longer than expected it can feel like a magnifying glass is on them.
“If everything is going well it’s like we don’t exist, but we work on the remotely piloted aircraft which is a huge mission Air Force wide, so if everything is going well then people don’t even know that we’re here, but as soon as something gets messed up, it can seem to have global impact and it’s like the magnifying glass is on us so it’s kind of a strenuous job,” he said.
No matter what’s going on in his life, Robinson completes his mission so he may attain his dream, and because of what his dream has meant to him, he stresses that everyone has a dream.
“If you have a goal just do it, no matter how far-fetched you think it is,” he said. “Put blinders on to those who won’t support you and who say you can’t do it, you don’t need them. Having a dream is the most important thing in life; otherwise you’re just going through the motions with no purpose. Your dream may not be to become a bodybuilder or the president, maybe it’s just getting your degree but you have to have a dream, because when you finally achieve it, it will be a feeling that you will never forget.” 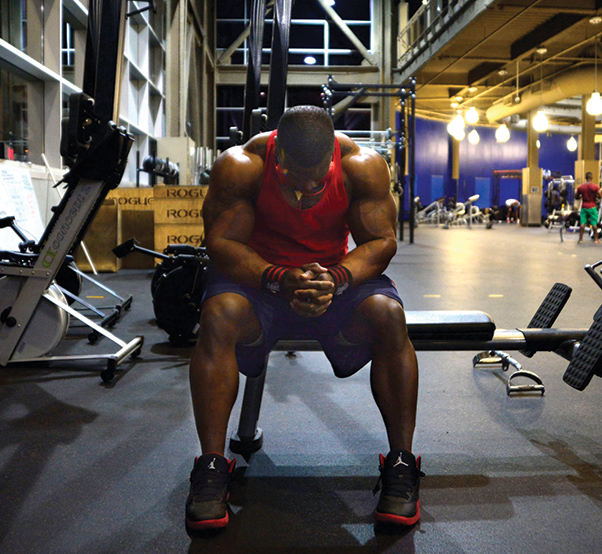 Tech. Sgt. David, 432nd Maintenance Group contract officer representative, rests during a workout at Nellis Air Force Base, Dec. 4. David is a professional bodybuilder in the International Federation of Bodybuilding and Fitness.