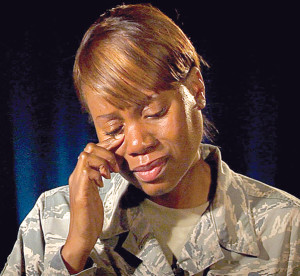 Master Sgt. Vickie Tippitt, a member of the 926th Force Support Squadron and the Nellis Air Force Base Yellow Ribbon representative, sheds a tear during an interview to discuss her rough childhood and how the Air Force saved her, at Nellis Air Force Base, Nev., Oct. 20, 2015. Tippitt, who plans on sharing her story with the base populace Jan 21. as part of a new Storytellers program, hopes to connect with other Airmen who might have gone through the same struggles through their childhood.