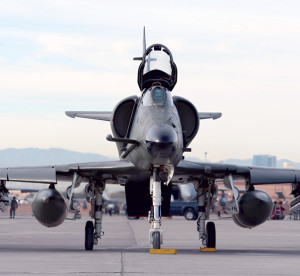 NELLIS AIR FORCE BASE, Nev. — Draken International, a commercial fleet of ex-military aircraft, recently won a bid for a short-term contract to provide adversary support here.
Draken International is based in Lakeland, Florida, and has a fleet of over 70 tactical aircraft. The company owns and operates the world’s largest commercial fleet of ex-military aircraft.
Draken’s extensive fleet is equipped with fourth-generation technology and is flown by former and current military-trained fighter pilots.
“Draken International has been asked to come in as contracted adversaries, “said. Lt. Col. Michael Shepherd, 57th Adversary Tactics Group deputy commander. “They fly the A-4 (Skyhawk) and they have won a contract that provides Nellis with contract adversary air or adversary support. So they are ultimately helping us supplement our red air capabilities so that we can present better pictures and presentations to the U.S. Air Force Weapons School, Red Flag, and other test agencies here on base.”
The 65th Aggressors Squadron’s inactivation in 2014 further limited the 57th Wing’s capability of providing support to training and test agencies around the Air Force and Department of Defense.
“We have always flown and we still have our F-16’s from the 64th Aggressors Squadron,” said Shepherd. “We also had, until last March, the 65th Aggressors which were F-15s. So we still fly the F-16s but we have a greater need for outside-agency support to help fill the number of aircraft that fly as adversaries.”
Though Draken is here for adversary support, they are not scheduled to participate in Red Flag or Green Flag exercises.
“We hope to support Red Flag and Green Flag,” said Terry Scott, director of Nellis operations for Draken International. “Currently, we are supporting the USAFWS. We hope and think that in the future we will be supporting Red Flag and we’ve talked casually about that. It’s going to be determined after the trial period.
“After the trial period, the 57th ATG commander will make an evaluation on us to determine if we are suitable to support Red Flag sorties. At Draken we feel very strongly that we can do this very effectively and I think the Air Force is going to be very happy with the product we’re providing to them.”
The current exercise started on November 30 and will go through December 16. They are scheduled to return again in April, where they will complete the remainder of their current contract which will expire in June.
“It’s a three-week trial period for the Air Force to evaluate us to provide adequate adversary support,” said Scott. ”It’s also a time to where we at Draken learn what the Air Force requirements are and fit into the system here to make sure our employment and execution is as seamless as possible.”
Draken was required to have a certain number of aircraft that were readily available to deploy within 60 days of completing the contract.
“Our A-4s were purchased from the New Zealand air force,” said Scott. “We brought them back and refurbished them. Before, the New Zealand air force had a modification and effectively what that did was put an F-16 avionics radar suite in the airplane.
“So when we go out and we fight — for example, F-15, F-16 and F-22’s — we look electronically very much like what an F-16 would look, so we blend in very well with the current aggressor force that is out here.”
Employing Draken instead of using Air Force assets comes down to dollars and cents. The Air Force is able to produce three to four sorties through Draken for the same cost as one F-15 sortie.
“When we closed the 65th Aggressors we recognized the need for adversaries was still as great, if not more so,” said Shepherd. “So while we still have that great need to produce adversary aircraft, we simply don’t have the Air Force assets. Draken has been contracted because they can do it cheaper and because they can still represent adversary tactics.”
According to Shepherd, Nellis AFB is a test base to see if contract adversary air will work for the Air Force and DOD.
“I think this is the way of the future for the Air Force,” said Shepherd. “We painted ourselves into a place where we need outside agencies to come and help us. Financially, we simply just don’t have the money and resources to do that in our Air Force. So when it comes time to train America’s best — whether it is the USAFWS, our test squadron, Red Flag and Green Flag, we need the help of other agencies to come out here. Draken is doing that currently and we’ll see how this experiment goes. If the experiment goes well, we plan on rebidding a longer-term contract.”