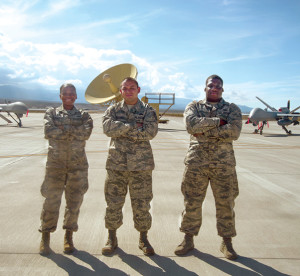 Creech Air Force Base, Nev. — Every day across military installations around the world, the dedication to duty is a solemn part of life. The time-honored traditions extend to fallen service members and distinguished visitors, and the flag separates those in the profession of arms from all others.
For the Airmen of the 432nd Wing/432nd Air Expeditionary Wing Protocol office who support the intelligence, reconnaissance and surveillance community, keeping our prestigious organizations’ traditions running is no easy task.
During a protocol-facilitated visit to Creech Air Force Base, the commander of Air Combat Command lauded Airmen for their exceptional dedication to duty.
“What our remotely piloted aircraft professionals are doing in today’s fight and in preparing for future conflicts is simply incredible,” said Gen. Hawk Carlisle, commander of ACC. “RPAs fulfill critical demands in every theater 24 hours a day, 365 days a year.”
Serving the Air Force’s largest wing dedicated to RPA operations with a year-round mission has proven difficult at times for the four-man team who has nevertheless remained dedicated to supporting those performing such a unique mission.
“I think the impact that protocol has on the RPA mission is pretty good if you think about it in the big picture,” said Tech. Sgt. Daniel, 432nd Wing/432nd Air Expeditionary Wing Protocol NCO in charge. “Our mission is to ensure visitors to Creech and the 432nd Wing are given the opportunity to see what the men and women of Team Creech do to support combatant commanders around the world.”
The 432nd Wing Protocol office, despite being one of the smallest protocol offices in ACC, directly oversees more than approximately 500 visitors annually that range from senior Air Force leaders to Department of Defense ID card holders to foreign dignitaries.
“On the surface it may seem that we get caught up in the day-to-day stuff of building itineraries, sending visit requests, and coordinating support, but when we see the visitors come and ask very direct questions on what support our Airmen need here to better accomplish the mission and then see our support needs get met, we know we did our job,” said Daniel.
In addition to providing support to distinguished visitors, the small team of professionals is also responsible for providing ceremonial support for all military ceremonies held on Creech AFB.
To date, approximately 60 ceremonies have been reviewed and overseen by protocol to include retirements, change of command ceremonies and promotions.
“We ensure that our traditions and heritage are upheld,” said Daniel. “They don’t see the attention to detail our Airmen put in and the time they spend making sure we are meeting the needs of our customers, but we make sure they get the most out of their visit or ceremony and it makes a difference.”
Maintaining the highest level of professionalism is something the protocol team has proved over and over again.
“Whether we are hosting distinguished visitors or overseeing various wing ceremonies and events; the protocol office takes tremendous pride in favorably presenting this wing’s people and its mission,” said Maj. Jamal, 432nd WG/432nd AEW chief of protocol.
In 2015, the 432nd played host to the Chairman of the Joint Chiefs of Staff, the Secretary of the Air Force, and the Chief of Staff of the Air Force.
These visits allowed wing leadership to showcase the dedication of the men and women providing consistent ISR capabilities despite manning shortages and resource deprivations.
“The more RPAs are demanded  and the more the Air Force learns about this mission and what they can do with it, the more visitors want to see how they can use it or how they can be a part of it,” said Daniel.
Some also credit these senior leader visits for the recent changes to the RPA enterprise, to include Secretary of Defense Ash Carter’s approval to reset the combat air patrol planning guidance to reflect a drop in CAPs from 65 to 60 this past April; a much needed initiative designed to alleviate the state of constant surge experienced by the RPA community.
The Air Force also moved $7.8 million into the RPA program to grow school house capacity, increase reserve component manpower augmentation days, and contract some downrange and recovery efforts.
Highlighting the RPA enterprise and the Airmen performing this highly sought after capability is one the protocol team takes great pride in.
“The more people find out about the mission here, the more they want to shake the hands and look into the eyes of our Airmen and say thank you for keeping our men and women safe around the world,” said Daniel. “We are just happy to be a part of it.”
One thing is certain; as long as the need for RPAs remains constant, the men and women of Team Creech will stand ready to deliver while maintaining the highest levels of professionalism, leadership and dedication to a proud heritage regardless of specialty code.
“The demand for ISR capability will always exist,” said Secretary of the Air Force Deborah Lee James. “We are focused on developing and managing ISR assets to be agile and responsive enough to support global and theater requirements in a seamless manner.”