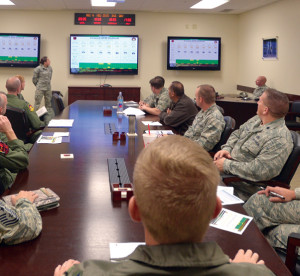 CREECH AIR FORCE BASE, Nev. — The 432nd Weather Flight is the largest of its kind in Air Combat Command with 51 personnel who support remotely piloted aircraft operations globally.
“We support organizations and units throughout the Air Force and Department of Defense,” said Capt. Jacob, 432nd Operations Support Squadron weather flight commander.
The weather flight is broken up into three sections: 432nd Wing Operations Center weather, 732nd Operations Group weather, and local weather. Each one has its own specific mission.
Local weather supports the local flying training operations at Creech Air Force Base. They also support any transient aircrews for Marine Corps training scenarios, Red and Green Flag exercises, and coordinates with the Nevada Test and Training Range.
The WOC Weather sections work 24/7/365 weather operations support for the 432nd Air Expeditionary Wing for 61 combat air patrols and 14 flying squadrons in five separate areas of responsibility. They forecast weather for most RPAs flying in Central and Africa commands.
The 732nd OG Weather section also works 24/7/365 weather operations support for three flying squadrons. Deeply integrated into the mission, weather Airmen sit next to mission commanders and pilots in ground control stations giving them the most up-to-date weather data possible to help ensure mission success.
The weather flight has multiple responsibilities regarding the mission at Creech AFB and downrange which benefit the global RPA enterprise.
“We ensure the safety of aircraft at home and abroad,” said Staff Sgt. Christopher, 432nd OSS RPA weather forecaster. “The RPA platform is unique in that the majority of the time the focus of their eyes are the ground rather than the sky around them, we are here to provide RPA crews ‘eyes in the sky’ and watch what is going on around them to keep them safe from weather phenomena.” 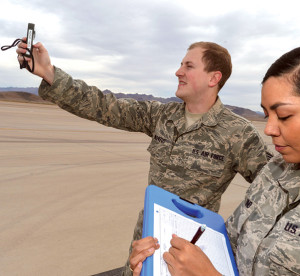 Another capability is the WOC weather website. This is a website used by not only the WOC, but also air operations centers and flying units around the globe to support RPA operations. This website was created and maintained by Staff Sgt. Thomas, who took it upon himself to innovate and create a product that thousands of people can view worldwide to better their mission.
Keeping each section evenly manned so the mission can be executed properly has proven to be a challenge.
“Most of my job is coordinating manning between my three different sections, ensuring they are as balanced as they can be to maintain operations, keep morale as high as possible, and give my people every opportunity I can,” said Capt. Jeff, weather flight commander.
According to Jeff, weather support is critical to the mission. RPAs are some of the most weather-sensitive aircraft in the U.S. Air Force inventory. Weather affects everything from the aircraft to satellite links to home station communication with the aircraft. It is essential for mission commanders to know what and where the weather is to effectively plan their missions around it.