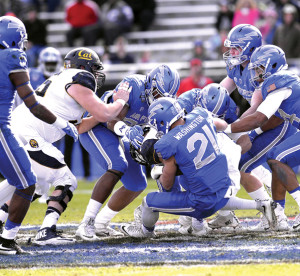 FORT WORTH, Texas — California’s passing game was too much for the Air Force Academy Falcons to overcome as they fell to the Golden Bears 55-36 in the Armed Forces Bowl Dec. 29.
Cal junior quarterback Jared Goff passed for 467 yards and six touchdowns, while the nation and seven NFL scouts looked on.
The Armed Forces Bowl matched the Academy’s run-based offense, ranked third in the nation, against the Cal Golden Bear’s passing attack, ranked fifth in the nation.
The game began with the team trading scores for the first quarter, but Cal managed to stop the Falcons a few times, while completing their own possessions into the Falcons end zone.
“We needed to capitalize on our possessions, block a little better, make better pitches and not turn the ball over as much,” said Falcons senior quarterback Karson Roberts, who racked up two passing and one rushing touchdowns.
The Falcon defense took an unexpected gut-punch in the first quarter when starting safety Weston Steelhammer was called for targeting wide receiver Bryce Treggs. The receiver missed a pass, and Steelhammer came in to make the tackle. With the play over, each player slowed their approach but Treggs lowered his head. Both bounced off each other but the referees ruled it as targeting and Steelhammer was ejected from the game.
“Losing Wes, which hurt us, but we know we all needed to step up,” said junior safety Brodie Hicks.
The Cal offense outdistanced Air Force in the second quarter, with Goff racking up two touchdown passes to widen the scoring gap and put Cal up 35-21 at the half. Goff and the Cal Bears widened the gap after halftime, while the Falcons tried several approaches on defense to stifle the Golden Bear passing attack.
“We did a little zone coverage and we did a little man coverage,” said Falcons head coach Troy Calhoun. “You’re allowed to bring anywhere from zero to 11 on the rush and we used a lot of that number to increase pressure.”
Goff is projected to be one of the top five quarterback prospects entering the 2016 NFL draft, if he declares himself eligible for the draft. In the Armed Forces Bowl, Goff broke the Pac-12 passing touchdown record of former Oregon quarterback Marcus Mariota, who starts at quarterback for the NFL’s Tennessee Titans. Seven NFL scouts watched the game.
In the second half, the Golden Bear passing attack widened the scoring gap between Cal and Air Force and put the game out of reach in the third quarter. Goff’s six touchdowns and 467 passing yards are the most of any quarterback in a bowl game this season.
“As a defense, we should take this game as a learning point and use it to be better next season,” said junior linebacker Grant Ross. The junior racked up nine tackles and one tackle-for-loss, as well as one 40-yard fumble recovery that was called back.
For Ross and the rest of the Falcons, the work for the 2016 season starts in February, earlier than most teams.