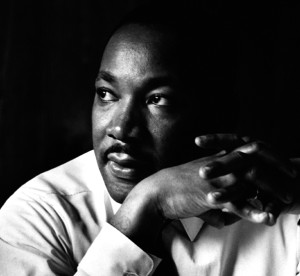 As the nation celebrates Martin Luther King Day Jan. 18, 2016, Airmen across the globe are reminded that his legacy can be found in more than just history books. Martin Luther King Jr. was a civil rights leader who took a stand against segregation. The road to having a desegregated force started with the Tuskegee Airmen. Today, Airmen of all ethnicities embrace leading the way together in the most diverse Air Force in history.

CREECH AIR FORCE BASE, Nev. — He was the voice of promise, courage and equality. His mission was fostered by the belief that all men should be treated equal, despite religion or race.
His life was chock-full of protests, demonstrations and confrontations, making for a rough path ahead of him.
His name was Martin Luther King, Jr., and through powerful words and peaceful protest, his message changed America forever.
As the nation celebrates Martin Luther King Day Jan. 18, 2016 to commemorate King, a civil rights leader who took a stand against segregation, Airmen across the globe are reminded that his legacy can be found in more than just history books.
In the 1940s, African-Americans were not allowed to buy homes, hold certain professions, or possess property. Seeing the way African-Americans were treated prompted King to speak out and challenge how skin color was seen in America.
“I refuse to accept the view that mankind is so tragically bound to the starless midnight of racism and war that the bright daybreak of peace and brotherhood can never become a reality,” said King during one of his demonstrations. “I believe that unarmed truth and unconditional love will have the final word.”
Some of his famous speeches and non-violent methods led to the repeal of Jim-Crow segregation laws, voting rights, and the integration of African-American students into public schools and into the U.S. military.
All-black Army regiments existed as early as 1775 but worked for less pay and under segregated conditions. It wasn’t until 1943 that African-Americans were given the right to operate their own aircraft, although the U.S. Army Signal Corps began using military aircraft in 1909.
On March 19, 1941, the 99th Pursuit Squadron was activated at Chanute Field in Rantoul, Illinois. Under orders of President Franklin D. Roosevelt, the squadron consisted of 271 enlisted men trained in aircraft ground support near Tuskegee, Alabama.
These Tuskegee Airmen were the first African-American flying squadron in the Army Air Corps, and the first to deploy overseas. Due to laws that still made discrimination legal, the squadron was separate from the rest of the Corps. Nevertheless, they took pride in their jobs as aviators and proudly operated under the 332nd Fighter Group during World War II.
Their aircraft, distinguishable from other P-51s by their red tails and noses, earned the Tuskegee Airmen the nickname “Red Tails”. They were a symbol of hope, and a glimpse of what was to come in the future.
When President Harry Truman signed an executive order on July 26, 1948, he outlawed segregation for good. Alongside his decision, he also created the Fair Employment Board so all races could work in the Department of Defense under the same conditions.
Nevertheless, the DOD still had a lot of work to do to enforce the new directive. It would be another 15 years before Army Air Corps, which would become the U.S. Air Force in 1947, completely desegregated.
During his famous speech “I have a dream,” in 1963, King described his vision for the future. In doing so, he set the precedent for both America and its military.
“I have a dream,” said King. “I have a dream that my four little children will one day live in a nation where they will not be judged by the color of their skin but by the content of their character.”
Almost 75 years from when King shared his famous words on the steps of the Lincoln Memorial, America continues to practice tolerance and acceptance of all races. Airmen all over the world don the same uniform and demonstrate that they are fit to fight, no matter their ethnicity and each brings something important to the fight.
“The greatest strength of our Air Force is our Airmen,” said Gen. Mark A. Welsh, Air Force Chief of Staff. “The greatest strength of our Airmen is their diversity. Each of them comes from a different background, a different family experience and a different social experience. Each brings a different set of skills and a unique perspective to the team. We don’t just celebrate diversity … we embrace it!”