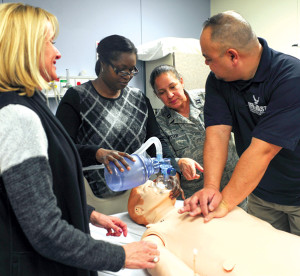 NELLIS AIR FORCE BASE, Nev. — In 2006, the United States of America was fighting terrorism in the Middle East. With gruesome images showing up daily on news reports, it reminded the American people and the world how one conflict could devastate the lives of military service members and their families.
Marisa Hester is a nurse who was one of those people that saw how bad the war on terror had become. At that moment, Hester wanted to make a difference and help the people that provided her freedom.
“I was a nurse on the outside (civilian sector) and I wanted to come in at the time because, we were still at war,” Hester said. “I thought that I had a trade were I could help my fellow mankind, because they are out there fighting for my freedoms, so why can’t I help them.”
Hester is now a Captain and student mentoring and retention team nurse cadre for the 99th Medical Group and has deployed twice since she commissioned in the Air Force, which has brought her ups and down.
“I deployed to Iraq in 2010 and Afghanistan in 2012,” Hester said. “Afghanistan was probably my most memorable. When I was deployed, I was attached to the U.S. Army. While I was there, most of the guys and girls that I saw lost their limbs. I would travel around to all of the different forward operating bases and help out wherever I would go. We had a 98 percent survival right while I was there which was great. We also had 168 patients that came through while I was deployed which was really high.”
After being a bedside nurse for most of her military career, Hester wanted to change things up once she returned to Joint Base Elmendorf-Richardson, Alaska before heading off the Nellis AFB in February of 2015.
“I permanently changed stations from Elmendorf AFB and I told my chief nurse that I wanted to do something different from being a bedside nurse,” Hester said. “She told me she had the perfect job for me and lone behold here I got this job for me. I was super ecstatic about it.”
Once becoming an intensive care unit student mentoring and retention team nurse cadre, Hester took her students to the University Medical Center in Las Vegas, Nev.ada to receive hands on training to prepare them for operations down range. 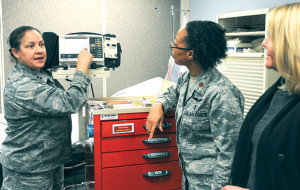 Capt. Marisa Hester, 99th Medical Group intensive care unit student mentoring and retention team nurse cadre, teaches how to properly use a device while administering care to patients at Nellis Air Force Base, Nev., Jan. 11. For her actions in the Air Force and in the civilian sector, Hester was awarded the Southern Nevada Nurse of the Year.

“My job entails that I take nurses and emergency medical technicians from other bases and Nellis, and I take them down to University Medical Center and we brush up their skills and we complete their clinical competencies,” Hester said. “The students will receive two weeks of training where it will be hands on with actual patients.”
With deployments starting to taper off, students skills were starting to decline which lead Nellis AFB to work hand in hand with the UMC.
“Probably two or three years ago, they noticed that a lot of the nurses in our medical staff, their skill sets were not where they needed to be, and in order to get those certain type of skills, we had to do something different then simulations,” Hester said. “If students have to deploy, they are ready. They have seen it before.”
While teaching students in the nursing realm, Hester likes to take the time to individually get to know every Airman that will be a part of the program.
“We tailor our training to the individual,” Hester said. “I would email the students coming into the program to find out what their strengths and weaknesses are, have they been deployed, so I can find out a little bit about the individual. Then I would take what they tell me and use that to get their skills up to par.
For her actions at both the UMC and the Air Force, Hester was nominated for the southern Nevada nurse of the year award.
“Someone has to nominate you, and they contacted me and I had to get the paperwork together. There are certain criteria that you have to meet, like having your certifications, you have to be in the clinical setting and if you have done any research,” Hester said. “There was some steep competition because of all of the nurses that I know at the UMC and they’re phenomenal.”
Maj. Ann Petcavage, 99th MDG director of sustainment of trauma and resuscitation skills program, who submitted Hester’s award package, also had high praise for her fellow Airman.
“She is awesome and (has) a compassionate attitude toward her fellow airmen. She leads by example,” Petcavage said.
After completing all of the paperwork and sending in letters of recommendation, Hester was awarded the Southern Nevada Nurse of the Year.
“It was an honor and humbling that I received the award because there are some great nurses out there,” Hester said. “For nursing (community), it is a big deal. For me, what I equate it to, is that civilian nurse of the year to me is like being the military nurse of the year. It’s a big deal, so I was shocked.”
While doing great work prior to the Air Force and while serving her country, Hester is thankful for the people who have been by her side along the way.
“I’m thankful for the people that have supported me and for those who believed in me,” Hester said.