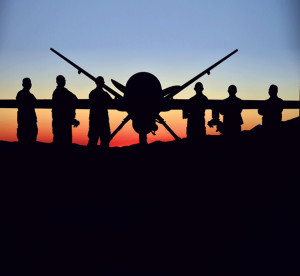 Airmen performing remotely piloted aircraft operations are dedicated to achieving the maximum impact on the battlefield have partnered with Air Force joint terminal attack controllers (JTAC) , Air Force tactical air control party (TACP) and sister service controllers to conduct and accomplish close-air-support (CAS) missions. RPAs assigned to the 432nd Wing/432nd Air Expeditionary Wing at Creech Air Force Base, Nev., and other locations around the world continue to be the number one most requested capability from combatant commanders around the world on a 24/7 basis.

CREECH AIR FORCE BASE, Nev. — As we enter 2016, the demand for remotely piloted aircraft in conflict areas around the world continues to rise, and with it, the misconceptions about this unique capability are on the rise.
In a time of budget cuts, manning shortages and tough decision making, achieving the maximum impact on the battlefield using RPA capabilities is a must. Partnering RPAs with Air Force joint terminal attack controllers (JTAC), Air Force tactical air control party (TACP) and sister service controllers is necessary to conduct and accomplish close-air-support (CAS) missions.
“The environment we’ve been operating in the last 15 years is a permissive environment where the only thing we’re worried about is the element on the ground,” said Gen. Herbert Carlisle, Air Combat Command commander.

Eye in the sky
RPA aircrews provide intelligence, surveillance, reconnaissance and strike capability to combatant commanders to achieve military objectives on a constant basis, even though they are not physically located aboard during CAS missions, like traditional aircraft used for CAS missions such as the A-10 Thunderbolt II.
Despite being geographically separated from both the aircraft and troops on the ground, aircrews of the MQ-1 Predator and MQ-9 Reaper remain invested in the missions they are supporting.
“The only difference between myself and a traditional aircrew member is that I’m sitting in a room half the world away,” said Senior Airman Shantae, 432nd Wing sensor operator. “This job is important to me because you can’t put a price tag on saving a life.”
Even with the high operations tempo, pilots, sensors, maintainers and intelligence Airmen supporting RPA operations find themselves facing manning shortages and resource constraints and thus are unable to provide every friendly on the ground with RPA support.
“The demand for CAPs [combat air patrols] and RPAs has gone up so radically, the ramp has been so high, we haven’t normalized and built a system to meet the demand,” said Carlisle.
With RPA capability requests at an all-time high, ISR missions continue to be the number one most requested capability from combatant commanders around the world on a 24/7 basis.
Dedication to the mission and providing help as much as possible are shared feelings among RPA operators.
“Being able to help the guys on the ground and bring them home is the most important, however, while providing over watch for ground forces and accomplishing the Air Force mission is the best part of my job,” said Shantae.
While maintaining a 24/7, 365 days a year mission has its challenges, the obstacles faced by ground forces are even more demanding. 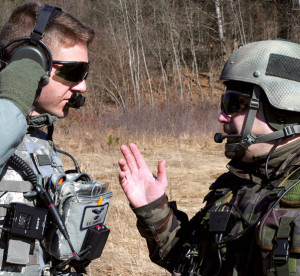 On the battlefield
As the Air Force sees a rise in demand for RPA capabilities they are also seeing a steady rise in the need for JTACs and TACPs.
Acting as skilled personnel on the ground, these Airmen are trained to direct the actions of combat aircraft engaged in CAS and other offensive and defensive air operations from a forward position.
“Like the RPA career field, we are seeing our fair share in manning shortages,” said a JTAC assigned to Air Force Special Operations Command. “It’s truly amazing what we can provide the combatant commanders as far as capabilities when we partner together with RPAs to accomplish a specific objective.”
According to Carlisle, the number of daily RPA CAPs, has increased from 21 in 2008, which met more than half of the Air Force’s needs, to 65 at its peak in 2015, CAPs were reduced to 60 in late 2015 allowing manning in the RPA community to stabilize and meet the current demands.
“Partnering two different capabilities from the air and ground provides us with the ability to develop patterns of life for targets,” said the JTAC.  “If and when the time comes to strike, we can do so with accuracy. This is instrumental in moving to a safer military for future conflicts. Not to mention, having the RPAs provide over watch from the sky makes us feel safer as well.”
In addition to CAP reductions, the Air Force strives to provide more Airmen with the training needed in simulated environments.
In 2008, a “virtual trainer” for JTACs students was built at Nellis Air Force Base, Nevada. This facility allows JTAC/TACP personnel the opportunity to work side by side with RPAs on the Nevada Test and Training Range.
“The close proximity of the school house to Creech and the RPAs give us the capability to train in a life-like environment while allowing the guys on the ground the opportunity to see the aircraft up-close,” said the JTAC. “In addition, we get to meet the crews we could possibly work with in the future so we aren’t just a voice over the radio … we’re people too.”
The message that the voices on the radio are people too is something the Airmen of the RPA community can relate to as well.
“What I would tell the world is, don’t call me a drone,” said Shantae. “Drones are autonomous; they can’t participate in CAS missions, they have no heartbeat, there’s no skips, there’s nothing there. It takes a human to work with humans. My heart skips when I hear a JTAC’s voice on the line who’s engaged in a TIC [troops in contact] situation. I’m not a drone; I’m just the new age operator.”
Yet creating perfect synergy capable of engaging the enemy from both the ground and the sky isn’t an easy task its one Air Force officials are dedicated to use move in the future.
“What our Remotely Piloted Aircraft professionals are doing in today’s fight and in preparing for future conflicts is simply incredible. RPAs and their operators are in the highest demand from our Combatant Commanders because of the situational awareness and strike capabilities that they enable. Despite being some of the newest weapon systems in the Air Force inventory, RPAs fulfill critical demands in every theater 24 hours a day, 365 days a year,” said Carlisle.