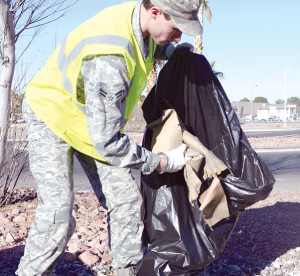 Nellis Air Force Base, Nev. — While driving around base, one has probably noticed a group of Airmen dawning yellow vests with trash bags in hand picking up trash. One may not realize that these select Airmen have taken time off from their normal duties to volunteer their time to participate in Pride Patrol, a clean-up program operated by the 99th Civil Engineer Squadron here.
“Pride Patrol is a 99th Air Base Wing program that is designed to have volunteers from each group to drive around Nellis AFB Areas One, Two and Three and pick-up any trash or debris that does not belong,” said Tech Sgt. Jake Quinories, 99th CES NCO in charge of the pavements, equipment, grounds maintenance shop and the program manager for Pride Patrol.
Pride Patrol was developed to significantly improve areas around the base for litter and as part of the base beautification project.
“This is a great program, and I believe it is needed to keep our base clean because of all our visitors each year,” said Quinories. “It is very important because Nellis AFB is visited by many distinguished visitors throughout the year, so at any given point we have many VIP’s on base that we do not even know about, so the base needs to look good at all times.”
Pride Patrol is a great volunteer opportunity for Airmen and is a way to give back.
“For everyone that is assigned to do Pride Patrol, it is not a bad job” said Quinories. “There is a negative connotation when people hear that they got put on Pride Patrol detail, but they can look at some of the positive aspects. It gets you out of your day-to day routine, you meet new people and is an opportunity to network, and it’s a pretty easy and relaxed schedule.”
For Airman 1st Class Zach Hartman, 99th Security Forces Squadron installation entry control, it has been a great experience.
“It gives you a break from your regular job and gives you a chance to clean up the base and take pride in doing that,” said Hartman.
Hartman is an advocate of the Pride Patrol program and believes that it is the responsibility of everyone to keep the base clean.
“If everyone would pick up after themselves and not litter it would really raise the appearance of the base,” said Hartman. “It’s important to take pride in your workplace and throw your trash away.”
“For people driving around Nellis AFB, please be on the lookout for a bluetruck with a big yellow ‘caution, vehicle makes frequent stops’ sign on the tailgate because that is the base Pride Patrol driving around making sure our base is looking good at all times,”So you can take ‘Pride’ in your home station Air Force base,” said Quinories.