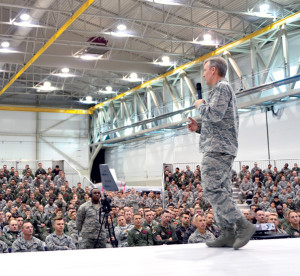 Gen. Hawk Carlisle, commander of Air Combat Command, briefs Airmen from the 432nd Wing/432nd Air Expeditionary Wing Jan. 14 during his visit to Creech Air Force Base, Nev. During the all-call, Carlisle recapped the findings of the Culture and Process Improvement Program, an initiative which studied challenges within the remotely piloted aircraft enterprise. He also explained the measures the Air Force is taking to alleviate the problems.

CREECH AIR FORCE BASE, Nev. — Gen. Hawk Carlisle, commander of Air Combat Command, and Command Chief Master Sgt. Steve McDonald paid a visit to the Airmen of the 432nd Wing/432nd Air Expeditionary Wing at Creech Air Force Base, Nev., Jan. 14 to address some of the challenges and unique issues the remotely piloted aircraft enterprise faces.
During the visit, Carlisle held an all-call where he talked about the Culture and Process Improvement Program and the results that came from that initiative. He also thanked the thousands of members who attended the focus sessions and responded to the surveys.
“I want to thank you all for your feedback,” Carlisle said. “We took what you said and put them into about 140 action items. These items are things we think we need to do to make this enterprise right. We want to build the force structure, and build the capability to have a sustainable enterprise that provides the warfighter with what they need, while taking care of the people who are doing the mission.”
Looking forward, Carlisle informed the Airmen of the progress and changes they can expect with the information gathered during the CPIP. One of the key issues he touched on was RPA manning and the need to increase that number by 2,500-3,500 Airmen.
“First and foremost you have to have people,” he said. “I need to take a portion of this enterprise and put them in dwell. I need to take those folks out of the fight and let them do tactics, techniques and procedures and let them figure out how else we can take advantage of this weapons system, and how it can help the warfighters.”
One significant change coming to the RPA enterprise is the expansion of location options through the strategic basing process.
“What we have here at Creech is huge,” he said. “It’s a lot of squadrons within a wing with a huge population. That is not average for a wing in our U.S. Air Force. We need to build at least one more wing, build more groups and more squadrons that are standard with the right equipment to do ‘X’ number of lines each day. With this we will be able to take squadrons out of the fight so they can do all of the other things squadrons do to keep themselves, healthy, trained and capable.”
Another project his group is working on is the force presentation and organization model, and building the RPA enterprise in support of this mission.
“There are a couple of key things when we look at new bases because of the size of this enterprise,” Carlisle said. “One of these is the flow of the information, does this place have an Air Operations Center, do these bases have infrastructure for information transfer.”
The ACC commander also talked about other opportunities that can be made more readily available to the RPA enterprise, such as education, promotion opportunities, and alternative job opportunities to build up the career track including the RPA maintenance career fields.
“We are looking at career progression and a career pyramid and how do we get you all the opportunities that every single other enterprise in the United States Air Force gets so you can move forward,” he said. “There are several other things we are looking at when it comes to enlisted retention opportunities with respect to bonuses and air crew incentive pay. We have lobbied hard with congress to make those changes and the potential of bonuses.”
Carlisle said the members of Creech AFB and the future of the RPA enterprise will continue to play a huge role in furthering our national security interests through persistent ISR and combat engagement when required.
“The men and women at the 432nd Wing are dedicated professionals, committed to the mission and every day they are contributing to our nation’s security today and maintaining readiness for tomorrow’s fight,” he said. “I’m extremely impressed not only by their professionalism, but also by their resiliency and the way the 432nd Wing has ensured that we win today’s fight but not lose sight of taking care of people and preparing for the future.  I’ve been inspired by the innovation and devotion these men and women show seven days a week, 365 days a year in executing one of our nation’s most critical missions.”