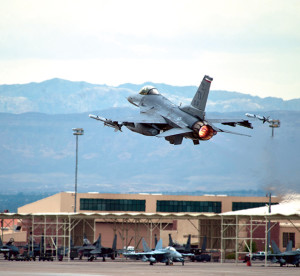 An F-16 Fighting Falcon assigned to the 457th Fighter Squadron, Naval Air Station Fort Worth Joint Reserve Base, Texas, takes off during Red Flag 15-4 at Nellis Air Force Base, Nev., Aug. 25, 2015. All four U.S. military services, their Guard and Reserve components and the air forces of other countries participate in each Red Flag exercise.

NELLIS AIR FORCE BASE, Nev. — Red Flag 16-1 is scheduled to begin Jan. 25 and will conclude Feb. 12. Base officials want to remind southern Nevada residents that they may notice increased military aircraft activity during this time period.
Aircraft are scheduled to depart Nellis Air Force Base, Nevada twice a day and participate in the exercise for up to five hours. Flying times are scheduled to accommodate other flying missions at the base and provide Red Flag participants with valuable training in planning and executing a wide variety of combat missions and exercise scenarios to validate joint and coalition operations.
According to the official Red Flag 16-1 press release — which can be viewed here: http://www.nellis.af.mil/news/story.asp?id=123466684 — this exercise will include aircraft from 24 different U.S. Air Force squadrons; four flying squadrons from both the Royal Australian Air Force and the United Kingdom’s Royal Air Force.
The 414th Combat Training Squadron, assigned to the 57th Wing, is responsible for executing Red Flag. The exercise is one out of a series of advanced training programs administered at Nellis AFB and on the Nevada Test and Training Range by organizations assigned to the U.S. Air Force Warfare Center.
Red Flag began in 1975 strictly as an aerial combat exercise but has evolved to include warfighting across air, space and cyberspace domains for United States and coalition air forces. The exercise has provided training for more than 440,000 military personnel, including more than 145,000 aircrew members flying more than 385,000 sorties and logging more than 660,000 hours of flying time.
Flying squadrons and assigned personnel deploy to Nellis AFB for Red Flag under the Air Expeditionary Force concept and make up the exercise’s “Blue” forces. Blue forces are able to utilize the diverse capabilities of their aircraft to execute specific missions, such as air interdiction, combat search and rescue, close air support, dynamic targeting and defensive counter air on the NTTR.
The NTTR is north of Las Vegas — the range is the U.S. Air Force’s premier military training area with more than 15,000 square miles of airspace and 2.9 million acres of land. With 1,900 possible targets, realistic threat systems and an opposing enemy force that cannot be replicated anywhere else in the world.
Nellis AFB and the NTTR are the home of a simulated battlefield, providing combat air forces with the ability to train to fight together in a peacetime environment to survive and win together. The exercise also prepares maintenance personal, ground controllers, space and cyber operators to support the mission within the same tactical environment.
For more information about Red Flag, call the 99th ABW Public Affairs office at 702-652-2750 or view the Red Flag fact sheet at http://www.nellis.af.mil/library/factsheets/factsheet.asp?id=19160.