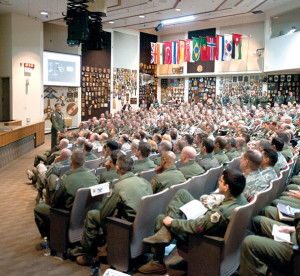 Gen. Frank Gorenc, commander of U.S. Air Forces in Europe-Air Forces Africa, provided the 2016 Weapons and Tactics Conference keynote address on Jan. 14, 2016 at Nellis Air Force Base, Nevada. WEPTAC is an annual two-week event to bring together warfighters from Combat Air Forces to discuss current issues, to look at future issues and to provide solutions for joint and coalition air forces.

NELLIS AIR FORCE BASE, Nev. — Air Force senior leaders, industry executives, joint and coalition warfighters converged for the 2016 Annual Weapons and Tactics Conference, hosted here by Air Combat Command, Jan. 3-16.
“WEPTAC is where wars are won,” said Lt. Col. Kendrick Carroll, ACC’s WEPTAC chairman. “There is no other venue on this planet where you can get the best and brightest subject matter experts throughout all the domains in one location to work on solving today’s biggest warfighting challenges.”
Weapons officers from across the Air Force capitalized on this year’s theme, “Integrating Multi-Domain Effects into Next Generation’s Warfighting,” alongside their joint and coalition counterparts, said Carroll.
“What that means is we’re taking all of our capabilities — air, space, cyber, land, sea, and electromagnetic, and integrating those into a combined effect so that we can continue to be the world’s greatest air force,” he said. “We’re taking the world’s most complex problems, what we call Major Combat Operations, and we are essentially planning to engage if and when an MCO is required, so that we can bring all those domains to bear.”
The conference, divided into two parts, includes a Mission Area Working Group portion where hand-selected teams of weapons officers gather to troubleshoot current air, space and cyberspace challenges. During the second week, participants transition into the Tactics Review Board, where tactics, techniques and procedures are improved upon using creative, cost-effective solutions. A first, WEPTAC grew to involve coalition partners this year.
“We are a much smaller fighting force than what we used to be five to ten years ago,” said Carroll. “What the coalition allows us to do is leverage upon their additional capacity in capability because we won’t fight another MCO with just the U.S. Air Force. It will be the U.S. Air Force, army, navy and coalition partners. In order for us to levy on joint and coalition capability and capacity we have to integrate them in the planning process, so there is no lag or gap in capability, and that’s what we’re doing here.”
According to Carroll, there have been cases where solutions developed at WEPTAC were implemented into real-world operations in a matter of 30 days or less.
Gen. Frank Gorenc, commander of U.S. Air Forces in Europe — Air Forces Africa provided this year’s keynote address, where he commended the participant’s fiscal and technical innovation, along with their ability to force multiply with partner services and nations. “I am so excited to be here,” said Gorenc, who’s served in the Air Force for 37 years.” To hear what you all came up with … I rely on the captains, majors and subject matter experts in this room to inform me.”
“Since I have been in, these new capabilities have been incredible; we turned short range into long range, long range into unlimited. “Since I have been in, these new capabilities have been incredible; we turned short range into long range, long range into unlimited. We’ve turned unguided bombs into precision-guided or GPS weapons. We’ve turned line-of-sight into beyond line-of-sight, we’ve given legacy equipmentmodifications and it works side by side with the new,” said Gorenc. “I’ve seen a lot and know what we’re capable of and I’m counting on all of you to keep the world greatest power strong.”
WEPTAC aligns with ACC’s priorities including; delivering the greatest amount of combat capability to meet our national security objectives and win our nation’s wars.