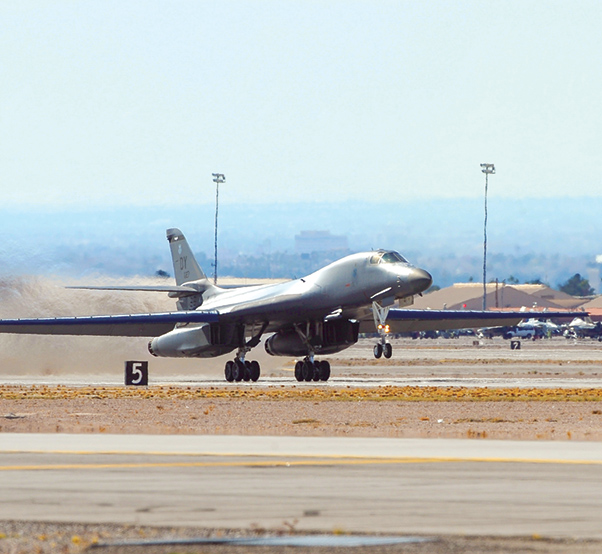 A B-1B Lancer, assigned to the 7th Bomb Wing, Dyess Air Force Base, Texas, takes off from Nellis AFB, Nev., during Red Flag 16-1 Jan. 29. The 7th BW is one of many U.S. and allied air forces the 606th Air Control Squadron from Spangdahlem Air Base, Germany, provides tactical command and control for during the three-week realistic air combat training over the 2.9 million acre Nevada Test and Training Range.

NELLIS AIR FORCE BASE, Nev.— When pilots fly over the massive Nevada Test and Training Range north of Las Vegas during Red Flag exercises, they always have to be in contact with one another to make key decisions which will determine who will be the day’s victors and losers.
Teamwork is the key to success when air combat flying squadrons train in harmony with space and cyberspace units from all around the world to participate in U.S. Air Force’s Red Flag exercises.
For the 606th Air Control Squadron, which operates out of Spangdahlem Air Base, Germany, they are the commanders of the sky. From ground equipment to radios and sensors, they have a big role in executing the mission wherever they may be.
The 606th ACS is a self-contained mobile combat unit with Airmen covering more than 21 career field specialties who operate and maintain over $170 million worth of equipment.
The unit provides daily command and control to the Spangdahlem AB 52nd Fighter Wing’s two flying squadrons in addition to the occasional control of Airborne Early Warning Force Command’s E-3A from Geilenkirchen North Atlantic Treaty Organization Air Base, Germany, and visiting aircraft from around the United States Air Force Europe Theater.
During Red Flag 16-1, the 606th ACS training objective is to control the skies over the NTTR.
“The 606th ACS, call sign Galley, provides tactical command and control,” said Lt. Col. Aaron Gibney, 606th ACS commander. “In other words, we use our sensors and radios to find, communicate and integrate. We also help solve problems, bring order, and make speedy decisions. We accomplish this by allocating airspace, finding targets, communicating the air picture, directing shooters, and integrating capabilities across multi-domains.”
With Red Flag recently integrating all three domains into one exercise, most of the 606th ACS Airmen are first time participants.
“Red Flag 16-1 is comprised of joint and coalition players and one of our main objectives during this exercise is to obtain a better understanding of how to integrate with our partners, especially at the highest tactical level,” Gibney said.
For the 606th operators, Gibney wanted to expose them to Red Flag to prepare them for situations and scenarios on a larger scale.
“The 606th Air Control Squadron is at Red Flag to provide world-class tactical command and control in support of all exercise participants. Red Flag offers the unique opportunity to expose our operators to situations and scenarios on a larger scale than can be replicated from our home station,” Gibney said. “We have over 30 operators across six crew positions to include two intelligence Airmen. The majority of our operators are attending Red Flag for their very first time.”
While participating in Red Flag, they will be using the same command and control system that they would use if they were to deploy.
“(This exercise) is very similar to real world operations and expectations for our operators,” said Maj. Jason Zemler, 606th ACS director of operations. “Our operators have the unique opportunity at Red Flag to execute on a system that is the same C2 system they will deploy or execute on during our next deployment.”
When units come to participate in a Red Flag exercise, they can expect to walk away with the best training possible that will ready them for a deployment when the time arises.
“While here, Galley operators experience many different pressures that they are not usually exposed to,” Zemler said. “The stressors associated with detailed mission planning and execution based on realistic threat systems and scenarios provides a learning opportunity that our operators cannot typically receive in any other environment. When you apply those stressors with time and weapons constraints, and repetition over a three-week period, both the stress and learning is phenomenal.”