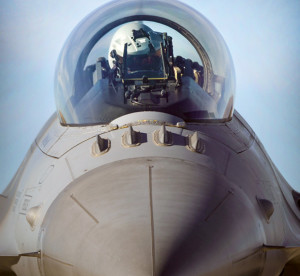 An F-16 Fighting Falcon pilot positions for take-off during Red Flag 16-1 at Nellis Air Force Base, Nev., Jan 25. This mock battle in the skies over the Nevada Test and Training Range has yielded results that will increase the combat capability of our armed forces for any future combat situation.