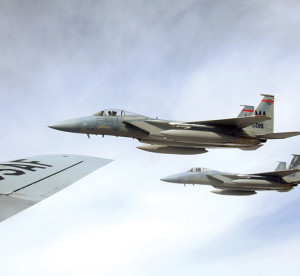 F-15C Eagles assigned to the 131st Fighter Squadron, Barnes Air National Guard Base, Mass., and the 194th Fighter Squadron, Fresno Air National Guard Base, Calif., fly beside a KC-135 Stratotanker Feb. 11 after refueling during a Red Flag 16-1 training mission. The F-15 Eagle is an all-weather, extremely maneuverable, tactical fighter designed to permit the Air Force to gain and maintain air supremacy over the battlefield.

NELLIS AIR FORCE BASE, Nev. — Three coalition nations joined forces here during the world’s premier advanced, realistic, combat air, space and cyberspace training exercise to build a capable, cohesive team.
For three weeks, Red Flag 16-1 trained squadrons to work together across branches and borders with personnel from more than 30 units from across the world including squadrons from Australia and the United Kingdom in joint, full-spectrum, readiness training to ensure understanding and confidence amongst teammates.
The three nations deployed approximately 3,000 personnel here to operate in a contested, degraded and operationally limited environment against simulated adversarial threats facilitated by Nellis’ 414th Combat Training Squadron.
“We exercise the muscle movements of the Air Force, Navy, Marines and Army as well as our coalition partners in a training environment where we control the threats,” said Lt. Col. Kevin Gordon, 414th CTS deputy commander. “We want our team to face the toughest challenge they are going to face, and we would rather them experience that in Nevada than in our next adversarial country.”
Group Captain Philip Gordon is the officer commanding of No. 81 Wing, Royal Australian Air Force Base, Williamtown, Australia, but during Red Flag 16-1 he is the acting Air Expeditionary Wing vice commander.
“It’s a fantastic opportunity to be the vice commander of the Air Expeditionary Wing here,” Group Captain Gordon said. “It gives me the ability to put an Australian perspective onto the planning and execution of these large integrated packages. I think one of the real strengths of Red Flag is that we can take different points of view from the United States, Australia and the United Kingdom and really come up with a good combined team approach.”
The team approach Red Flag facilitates created an understanding between the coalition nations that is not possible in any other type of training situation.
“Everyone brings an important piece to the fight,” said Col. Derek C. France, Red Flag 16-1, Air Expeditionary Wing commander and 325th Fighter Wing commander. “Our coalition partners bring aircraft that we don’t have. So being able to understand the capabilities and limitations of the other aircraft is imperative. This could be the one time that our U.S. pilots get to train with them and getting the most out of the experience is pretty important.”
Confidence is also a huge gain from Red Flag. It is not enough to understand what partner nations can do, the personnel must know they can rely on their coalition teammates to help complete the mission and ensure everyone comes home safely.
“Red Flag brings us confidence in our coalition partners and in other U.S. airframes,” said France. “That confidence comes from an experience where you are face-to-face with them from a planning, an execution and a debriefing aspect. The exercise enables a comradery that you don’t get anywhere else.”
To form a more cohesive unit and to teach the exercise participants outside perspectives, the important mission leadership roles rotated each day.
“We are fully integrated with the U.S. and the U.K. in the missions here,” Group Captain Gordon said. “On any particular day you could have an American mission commander, an Australian in charge of the air-to-air combat and a Brit in charge of the strike. When each person gets their time in the sun, they are going to do things a little bit differently and expose people to different ways of thinking.”
This type of integration, expedites the unity between squadrons and between nations.
“Over the time that I have been participating in and watching these missions, I have seen them evolve from a bunch of people operating alongside one another to a team effort where we are really quite tightly integrated,” Group Captain Gordon said.
With the completion of Red Flag 16-1, these coalition nations are one step closer to being an effective, complete team that, together, can face any adversary.