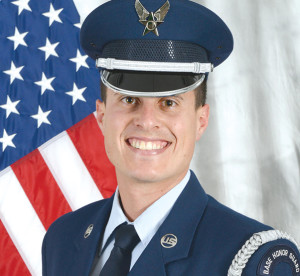 McCONNELL AIR FORCE BASE, Kan.—”Bearers, Attention.”
Standing motionless on the side of a cemetery road, rendering a perfect salute, waiting for the hearse to pass us and stop just paces away. The family, close behind, tries to remain together one last time before their loved member is lowered to eternal rest. Not many things compare to the intense feeling I experienced on my first detail as a McConnell Base Honor Guardsmen.
Two weeks before my first detail, I arrived at the honor guard building, anxious and ready to represent the base in the community and honor veterans who had served our Air Force. Two weeks of nothing but practice and drill inspired even more pride for the job I was preparing to perform for the next four months. But just like coming out of technical school, I had no idea how much more there was to learn while doing the job.
When I arrived at McConnell, I asked my first sergeant if I could go to Honor Guard. My request was denied because I hadn’t finished my upgrade training, but I was promised I would get my chance.
Ten years ago, 15-year-old me watched the Air Force Honor Guard Drill Team perform in a crowded school gymnasium. I was part of Junior ROTC and knew I would be in the Air Force one day. I looked forward to being part of honor guard in the future.
Fast forward to now, and I just finished honor guard and earned Honor Guardsman of the Quarter Honors. I did my first detail early August and the last one late November before I trained the flight replacing me. More than 40 details in-between taught me a lot of lessons about respect, military bearing and traditions, but the most important lesson was about honor.
During my time in honor guard, honoring fallen veterans was an intense feeling that taught me respect for those who served.
Performing details is not just about honoring those who served and died, but it is also an honor to be the last people who carry the casket and fold the flag over it.
Showing last respects to fallen heroes is something that takes more than putting on the uniform. I learned to stand tall, look the family members in the eye and tell them how proud we are to present them the flag for the service their loved one provided for our country.
“On behalf of the President of the United States, the United States Air Force and a grateful Nation, please accept this flag as a symbol of our appreciation for your loved one’s honorable and faithful service.”
We render a last salute and share a bond knowing we eased the pain of a fellow Airman’s family.