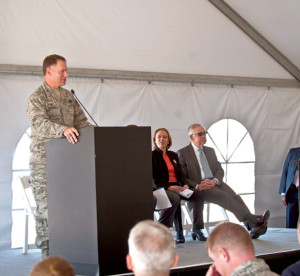 NELLIS AIR FORCE BASE, Nev. — The U.S. Air Force unveiled the Nellis Solar Array II during a dedication ceremony here Feb. 16, which combined with Solar Array I makes the installation’s photovoltaic field the largest in the Department of Defense.
The energy generated between the two is enough to power approximately 9,000 southern Nevada homes as well as approximately 42 percent of the kilowatts per hour needed to power the installation.
The new array is connected to a new substation provided by NV Energy on Nellis Air Force Base. This will allow the installation’s energy vulnerability to be reduced by providing a mission-critical redundant power source.
During the dedication ceremony, Col. Richard Boutwell, 99th Air Base Wing commander was accompanied by representatives from NV Energy, SunPower Corp, Assistant Secretary of the Air Force and Sen. Harry Reid.
“The partnership we have with NV Energy and SunPower began over nine years ago with the ribbon cutting of our first solar photovoltaic array, and combined today with the second array will be the largest PVA in the Department of Defense,” said Boutwell. “This goes hand-in-hand with one of the key purposes of our mission here in Nevada — to be a good neighbor, to find ways where economic growth is compatible with military requirements.”
To promote the U.S. Air Force’s commitment to being good stewards of the environment solar array II construction began in March 2015. SunPower Corp. built the $50 million Nellis AFB project that is owned and operated by NV Energy on land leased by the U.S. Air Force.
“It is a privilege to be here today as (NV Energy) partners with Nellis Air Force Base, but as importantly with the men and women who serve our country and protect our freedoms every day — thank you all for your service,” said Paul Caudill, NV Energy CEO. “Our power plant will provide clean renewable energy for years to come for Nellis. Make no mistake about it; Nellis is an exceptional community partner and customer for NV Energy.”
Miranda A. A. Ballentine, Assistant Secretary of the Air Force for Installations, Environment and Energy, said the Air Force is focused on continuing critical community partnerships like these that also advance the service’s energy resiliency, deliver cost effective and cleaner power.
“These goals are important to us, but this solar array doesn’t stop at making better use of land, meeting Air Force renewable energy goals, and saving money,” Ballentine said. “This project also enhances our mission assurance through energy assurance and showcases how interlocked our national security is with our energy, the economy and our environment.”
According to the U.S. Environmental Protection Agency’s data, the new solar power system will avoid producing 27,000 tons of carbon dioxide emissions annually, which is equal to removing 159,867 cars from Nevada’s roads over the next 31 years — the term of the lease.
According to a proclamation signed by President Barack Obama, the Nellis Solar Array projects enhance the installation’s energy security of uninterrupted availability of energy at an affordable price; helps the Air Force reach federal goals to increase our nation’s prosperity; combat climate change; protect the interests of taxpayers; and safeguard the health of our environment.