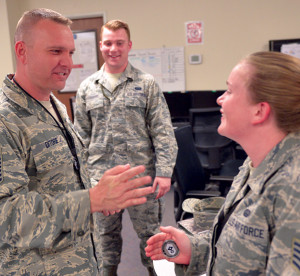 CREECH AIR FORCE BASE, Nev. — Preparing to support remotely piloted aircraft operations is no easy task. Still, Airmen assigned to the 432nd Wing/432nd Air Expeditionary Wing recently spent time showing leadership exactly what it takes to provide RPA intellegence, surveillance, and reconnaissance support 24/7, 365 days a year.
Chief Master Sgt. Michael Ditore, 432nd WG/ 432nd AEW command chief, shadowed two Airmen from the 432nd Aircraft Communications Maintenance  Squadron February 10, 2016, and learned about how the ACMS provides the link between RPAs and ground support at Creech Air Force Base, Nevada.
Senior Airman Robert, a communications mechanic, and Staff Sgt. Rachel, a communications supervisor, are responsible for ground control squadron maintenance. Assigned to the 432nd ACMS, they maintain the electronic link between pilots in the ground control station and their RPAs.
Robert and Rachel are also a part of the only communications squadron that services GCSs at Creech. The GCS acts as a cockpit to pilots and sensor operators who control the MQ-1 and MQ-9 aircraft from the ground, and being the only specialists with the tools to maintain them makes their job especially important to the RPA mission. 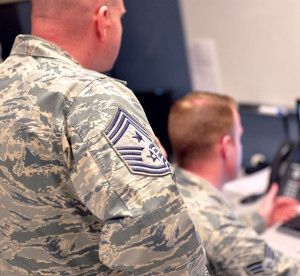 As they conducted a preventative maintenance inspection (PMI) with Ditore, the Airmen covered important aspects of the job, and provided him with valuable insight. The Airmen showed Ditore how to properly care for the station, as well as how to fix it if something goes wrong.
Robert said that keeping the GCSs maintained enables pilots and sensor operators to fly, and demonstrated that without them, RPA flight just wouldn’t be possible.
“When you’re enabling combatant commanders to successfully complete the mission, it’s a great feeling,” said Robert. “I love being in the Air Force, and being in communications because there is a requirement everywhere for us. We can go anywhere in the world, we can set up anywhere in the world.”
For Robert, GCS maintenance often involves more than wrench turning, it also focuses on servicing the computers and the technical aspects of communications that enable RPA crews to talk with ground crews and the aircraft itself.
As part of his efforts to develop Airmen at Creech, Ditore developed the shadow an Airman for a day program to put faces to the Airmen of the community.
“It’s really important that we get to know our Airmen and what they are doing,” said Ditore. “We all bring something to the fight. It’s important for us not to lose that perspective of one another.”
As a former maintainer, Ditore felt at home performing the PMI alongside the ACMS Airmen. Ditore finished various tasks alongside the Airmen, from cleaning computer screens to taking apart GCS items. 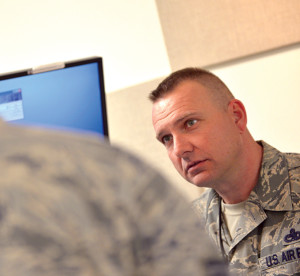 Like most other jobs in the Air Force, paperwork is a crucial part of maintenance inspections. When Ditore was finished with the shadow, Robert showed him how to fill out forms and mark discrepancies found during the inspection, explaining what each one meant and how to write them.
Ditore said shadowing the Airmen allowed him to gather a new perspective on the 432nd ACMS and their importance to the mission.
“[Working with] communications gives me variety,” said Ditore. “It lets me see how these Airmen are making a difference, helps me find out how to help and show we care.”