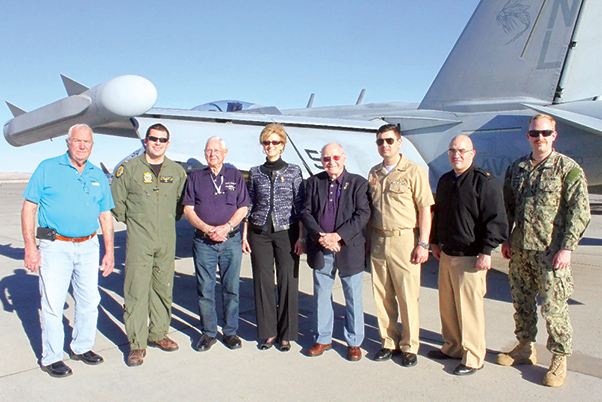 NELLIS AIR FORCE BASE, Nev. — Nearly 100 years after the battleship USS Nevada was commissioned, March 11, 1916, five of the dozen still-living Sailors assigned to the ship during World War II came to Las Vegas for the ship’s reunion.
The veterans were welcomed by the Las Vegas Navy Operational Support Center staff Feb. 9.
The Sailors spent time with the Sailors of today’s Navy and received a tour of the Nellis Air Force Base flight line.
Lt. Cmdr. Micah Weller, NOSC commanding officer, spoke to the veterans and their family members after they watched a video of the 100th anniversary of the U.S. Navy Reserve celebration.
The NOSC sailors learned of the tough ways of being in the Navy during World War II.
Ninety-one-year old former Seaman Apprentice Cliff Burkes spoke of his 80 grueling hours as an 18-year-old, shooting in one of the USS Nevada’s 5-inch gun turrets during the D-Day Invasion of Normandy.
“I was so hungry, but we never stopped shooting as the invasion was taking place”, Burkes said.
He said they were sent down a can of peaches, “Thirteen peaches were in this can and there were 12 of us. Each of us got one peach and the last one we split into 13 small pieces.
“We never moved from our gun turret for those 80 hours,” Burke said.
Weller told the USS Nevada veterans of the Navy’s smaller war ships of today with their newer weapons systems and how computers assist smaller crews to run the ships.
Accompanying these distinguished Sailors was retired Rear Adm. Kathleen M. Dussault, deputy director of benefits for the Department of Veterans Services in Nevada.
Dussault thanked the new generation of Sailors who surrounded the World War II USS Nevada veterans.
“To the Sailors now keeping watch, we are grateful to all of you for taking our place in our great Navy, we are in great hands thanks to you,” she said.
After their visit at the NOSC, the USS Nevada Sailors, Dassault and their family members were given a tour of the Nellis Air Force Base flight line. During this tour the USS Nevada veterans and their family members were all glued to their windows as they passed the United States Air Force Thunderbirds F-16s and the U.S. military’s newest fighter the F-35.
They were taken over to one of the Navy’s newest aircraft currently participating in Red Flag 16-1, the E/A-18 Growler with Electronic Attack Squadron 138 located at Naval Air Station Whidbey Island, Washington.
At the end of the tour they met with Matt Taylor, a U.S. Marine veteran with Congressman Joe Heck’s office. With the Thunderbirds diamond formation statue in the background, Taylor presented each man with a certificate of appreciation for their service on the USS Nevada during World War II.
There are currently only a dozen men still living who were part of the USS Nevada’s company. The five members who were able to attend this reunion came from all across the United States.