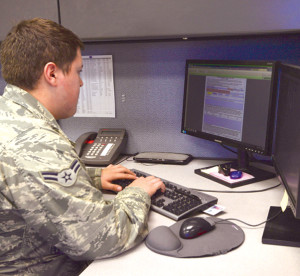 Airman 1st Class Jonathan Camelo, 99th Force Support Squadron force management journeyman, looks over an evaluation performance report at Nellis Air Force Base, Nev., Feb. 22. The Air Force is on year two of the three-year rollout of the most substantial changes in how we are evaluated and promoted since 1970.

NELLIS AIR FORCE BASE, Nev. — The Air Force is on the second of its three-year rollout of the most substantial changes in evaluation and promotion since 1970. The new evaluation and promotion system makes job performance the driving factor in promotions. The 99th Force Support Squadron is responsible for ensuring every Airman on the installation receives an evaluation of their duty performance in accordance with Air Force Instruction’s and is the lead element in implementing these historic changes for Nellis AFB.
For technical sergeants and below, forced distribution limits the top-two promotion recommendations a commander is authorized to give to promotion-eligible Airmen. The restrictions under forced distribution are tied to historical promotion rates in each grade designed to ensure those Airmen receiving top-tier promotion recommendations have a distinct advantage for promotion. The total number of forced distribution quotas is based on the total number of promotion-eligible Airmen a commander has in a specific grade on the static close-out date.
For the 99th FSS, the focus is getting the word out to Airmen about the changes taking place.
“Getting the word out to the commanders and base population on how the new system works and when evaluations are due is the most important thing right now,” said Master Sgt. Arnold Alcazar, 99th FSS superintendent. “We are slowly transitioning from regular close-out dates to static close-out dates and commanders having a hand in getting their top people promoted.”
The changes to the system are intended to ensure the Air Force truly makes job performance the driving factor.
“The thought process was a lot of the evaluations were over inflated and needed to change,” said Alcazar. “About 95 percent of everyone was a firewall five. How it should be is, five percent should be firewall five. The Air Force wanted to make job performance be the main focus of the promotion process so that those who excelled at their job were recognized for it and it weighed more in the promotion process.”
“The new system gives the opportunities for the commanders to recognize top performers and not just blend them in with the rest of everyone else,” said Tech Sgt. Melissa Thomas, 99th FSS NCO in charge force management.
Even though the main focus of the promotion process is job performance, one must still be a well-rounded Airman.
The new system has already shown to be beneficial in multiple areas.
“One of the benefits of the new system is that it encourages commanders to be more engaged with their second tier leadership and find out who is doing what,” said Alcazar. “It gives them a better view on who is performing and exceling at their job and who maybe needs a little more time before being promoted. Also, it forces Airmen to step up and go a little bit above and beyond what is required of them to stand out.”
The Air Force has made other adjustments to the evaluation and promotion system for the 2016 calendar year.
Beginning in 2016, enlisted performance report point calculations for promotion to grades E-5 and E-6 will be based solely on an Airman’s last three forced distributed reports in their current grade. This adjustment provides an equitable method for transitioning from the legacy to the new system. Accounting for legacy EPRs, if in current grade, is accomplished by considering and factoring them into an Airman’s promotion recommendation. This allows a clean break under the new Forced Distribution system where no points are awarded for legacy EPRs.
Also, EPRs available for review by senior NCO evaluation boards will decrease from the previous 10 to five years beginning with the calendar year 2016 master sergeant evaluation board. This change allows an increased focus on recent performance and compliments implementation of restricted stratification and forced distribution rules that also emphasize recent performance.
With the change from reviewing 10 years of reports decreased to five years, the Air Force is also transitioning to a single-phase process for the upcoming master sergeant evaluation board.
Starting with the 2016 promotion cycle, the master sergeant evaluation board will be condensed into a single-phase process in which all weighted factors and board scores are combined into one score for each Airman. Accordingly, this single-phase approach will eliminate the EPR points as a separate weighted factor similar to senior and chief master sergeant evaluation boards.
With a new system comes a lot of questions and the 99th FSS encourages anyone who has a question about the new evaluation and promotion system or about EPRs to contact them.
“We love answering any questions because we want to make sure everybody is well engaged and knowledgeable about the new system, said Alcazar. “It does affect one’s career so it is important to get this information out and answer any questions one might have.
“Also, we encourage people to make sure your records are updated. All records should be aligned and ready to go at least a month before the static closeout date.”
For more information the 99th FSS evaluation section can be contacted at 702-652-1585 or can contact Master Sgt. Alcazar directly at 702-652-9280.