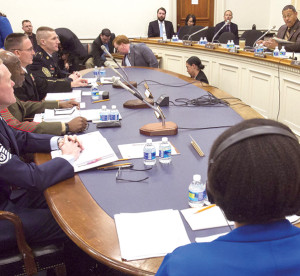 Chief Master Sgt. of the Air Force James A. Cody testifies on Capitol Hill before the House Appropriations Committee’s Subcommittee on Military Construction and Veterans Affairs Feb. 26 in Washington, D.C. The oversight hearing was being held to learn about quality of life in the military concerns from each of the service’s senior most enlisted members. During his opening statement Cody stressed the cumulative impacts of sequestered and reduced budgets on the compensation and quality of life of Airmen and their families. Cody stressed that the Airmen who serve today do so freely, proudly and voluntarily because they believe in what America stands for and are ready to defend its cause. He added that our nation must honor that commitment by providing for them and their families.

WASHINGTON — Chief Master Sgt. of the Air Force James A. Cody testified on the quality of life in the military before the House Appropriations Committee’s Subcommittee on Military Construction and Veterans Affairs on Capitol Hill Feb. 26.
“There is no doubt today’s Airmen are the most talented, educated and experienced force our country has ever assembled,” Cody said. “They are professional men and women who are proud to serve, but remain concerned as fiscal restraints limit their capacity to accomplish the mission and erode at the compensation they earn in service to our nation.”
During his testimony, Cody focused on several areas concerning the service’s quality of life, to include compensation and readiness.
“Our Airmen continue to provide the preponderance of combat force against our adversaries around the globe,” Cody said.
Cody testified that from 2012 to 2015 limited budgets have forced the Air Force to cut its manpower by nearly 24,000 Airmen on active duty and in the Air National Guard and Air Force Reserve. However, combat operations around the globe have remained steady for the Air Force in some areas while escalating in others; as of this January there are 24,000 Airmen deployed worldwide.
“In that same time period, diminished budgets have forced the slowing of normal growth in compensation, and have begun to cut at our Airmen’s buying power,” Cody said.
According to Cody’s written statement, the fiscal year 2017 budget request grows the active force to 317,000 Airmen in order to meet global warfighting requirements. The plan requires a focused effort to ensure critical resources are available in a timely manner in the recruiting, accession and training pipelines. The Air Force has met accession requirements for the past 16 years.
“We plan to monitor the recently enacted compensation changes to ensure they do not hurt recruiting and retention,” Cody said.
Cody also stated 2015 was an extremely difficult year due to the highest number of suicides in his tenure as the chief master sergeant of the Air Force. “We must, and will, do more to combat suicide and prevent Airmen from making a terrible, life-ending decision,” Cody writes. He added that following a suicide prevention summit in September 2015, Air Force leadership directed working groups to define specific actions to reduce interpersonal and self-directed violence and destructive behaviors.
Cody closed his opening comments by reinforcing the nation’s responsibility to the men and women who serve.
“As we continue to implement these reform measures, including changes to retirement, basic allowance for housing, Tricare and more, we must never lose sight of the full impact on our Airmen’s readiness and resilience,” Cody said. “The Airmen who serve today do so freely, proudly and voluntarily because they believe in what America stands for and are ready to defend its cause, but our nation must honor that commitment by providing for them and their families.”