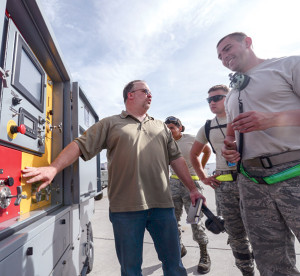 Eddie Preston (left) trains Airmen from the 57th Aircraft Maintenance Squadron on how to use the new hydraulics purification machine at Nellis Air Force Base, Nev., March 3. The new hydraulics cleansing procedure that the 57th AMXS is implementing will not only improve the performance of the F-16 and reduce maintenance time, but will also save the Air Force money in the process.

NELLIS AIR FORCE BASE, Nev. — The F-16 Fighting Falcon has been a staple of the U.S. Air Force’s flying force since its inaugural flight on Jan. 20, 1974.

With the current F-16 fleet still operational, members of the 57th Aircraft Maintenance Squadron at Nellis Air Force Base, Nevada, are taking steps to ensure the fighter will be a part of the force for years to come.

To ensure the longevity of the F-16s, a new hydraulics cleansing procedure is being implemented by the 57th AMXS.

The new procedure will not only improve the performance of the F-16 and reduce maintenance down time, but will also save the Air Force much needed money in the process.

Preston said the new purification process being implemented by the 57th AMXS provides the F-16 a number of positive benefits along with overall cleansing of the hydraulic systems. 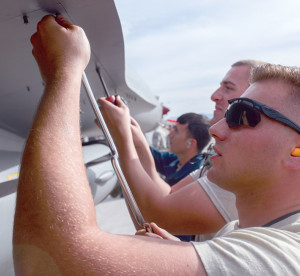 The normal process of cleansing hydraulics of the aircraft was to drain and flush the entire system, but now hydraulic purification can flush the fluids so no contaminates are present.

“(The hydraulic purification) helps get the purest fluids into the aircraft so no contamination clogs up the systems,” said Staff Sgt. Coral Crawford, 57th AMXS crew chief. “There are filters in place but they don’t eliminate everything. Purifying helps keep those filters clean and if anything catastrophic happens the purification will catch it.”

Crawford stated, that not only does the newest process clean the filters and purifies the fighter hydraulics system, it saves the 57th AMXS valuable time on maintenance.

“The process helps the F-16 last longer, and prevents maintenance,” said Crawford. “Every time the old filters were clogged we’d have to perform maintenance.”

In addition to all of the positive effects that come from hydraulic fluid purification, the process also has an amazing plus when it concerns Air Force readiness as a whole.

“The hydraulics way stream is one of the top cost drivers in the Air Force,” said Preston. “Prior to hydraulic fluid purification the only way to remove contaminants was to drain and flush the system. Now we’re able to do that while simply doing the maintenance checks, thereby eliminating the costly way stream of hydraulic fluid in a much more timely manner.”

The new process not only helps the Air Force by being cost effective, the maintenance professionals of the 57th AMXS are also on board with how much more effective the purification is.

“With the new hydraulic test stands, it’s making everything easier,” said Crawford. “Because the old style was analog and the new style is all digital, you have a few knobs but its touchscreen and it’s making life so much easier.”

These new methods of maintenance for the F-16 will not only make the mission easier for the Airmen of the 57th AMXS, but is also a step further in preparing the U.S. Air Force for tomorrow’s victories.