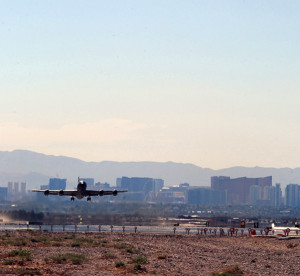 During the exercise, the tanker task force training objective is a total force integration effort among active, guard and reserve units with the intention of sharing operations and maintenance function to conduct air refueling support worldwide.

“Red Flag promotes integration and camaraderie between mobility and combat air force assets along with our international partners participating,” said Maj. Rob Knapp, Red Flag 16-2 Tanker Task Force detachment commander. “Training in this setting improves joint and coalition warfighting capabilities and is designed to push us beyond our comfort zone. This helps prepare us for current and future contingencies that will require tankers as the backbone for our success.”

“Rapid global mobility is what sets the U.S. Air Force apart from any other air force in the world and the tanker support missions are the reason our fleet reaches as far as it does,” said Knapp.

The purpose of Red Flag is to challenge Airmen and other coalition forces in ways they have not encountered before and motivate them to find creative solutions to provide effective weapons, tactics and command and control integration across air, space and cyberspace scenarios they are presented.

“This is my second Red Flag exercise, but I’m looking forward to the challenges my crew and I will face to complete the missions during our time here,” said Airman 1st Class Cody Shumate, 349th Air Refueling Squadron boom operator. “I also look forward to having fun doing the mission while learning how to improve what we already do as a great Air Force tanker crew.