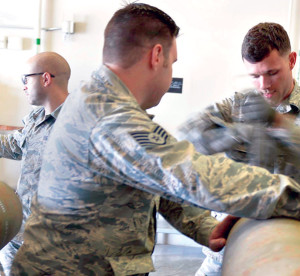 CREECH AIR FORCE BASE, Nev. — Down a long, winding road that leads far away from the flight line exists a world all its own at Creech Air Force Base, Nevada.

It’s a world behind fences, checkpoints and personnel and secures the most dangerous ordnances on base.

For approximately 60 Airmen of the 432nd Maintenance Squadron’s munitions flight, this is where they work every day, supplying remotely piloted aircraft with the weapons needed to project conventional airpower.

“Without ammo, Creech wouldn’t be able to do its part in enabling global RPA strike operations,” said Senior Master Sgt. Barry, 432nd MXS munitions flight chief. “My unit is made up of some very strong and motivated Airmen, we’re a team. We get the job done, so that other Air Force Specialty Codes can have what they need to do their part.”

Of course, these Airmen aren’t all about building bombs. The flight stays busy managing production, materials, systems, and surveillance of assets, as well preparing many different types of munitions used to support global contingency operations.

These assets are used by various commands such as Combat Arms Training and Maintenance, 799th Security Forces personnel, 99th Civil Engineer Squadron explosive ordnance disposal, and many others, aside from supplying training units for the MQ-1 and MQ-9 RPAs.

“We don’t just put bombs together, we supply [the RPA enterprise and sister] services on base with ammo, even ordnance disposal out at Nellis,” said Master Sgt. Chris, 432nd MXS munitions flight production section chief. “When other services participate in joint task exercises, we provide all the ammunition.”

Ammo troops work hard to get the right materials into the right hands. With the wide scope of responsibilities, the work can be challenging, but the Airmen are up for any task thanks to exceptional leadership, training and camaraderie found within the unit.

Ammo supplies firepower not only to Creech, but to every contingency the United States has ever engaged.

The big picture
In conjunction with intelligence, surveillance and reconnaissance needs of joint combatant commanders, strike capabilities are also in avid demand. To continue saving the lives of military men and women serving downrange, these munitions supplying the weapons that enable these missions.

“What the Airmen are doing affects the entire world,” said 2nd Lt. Luke, officer in charge of the 432nd MXS munitions flight. “We support a number of missions at home and provide manpower downrange. Without ammo, RPA’s can do surveillance but they can’t take on the enemy.”

Inside the Munitions Flight
Bomb building is no easy task. There are seven functional areas within the unit which collectively oversee and account for $14 million in assets. This amount equals roughly two million munitions and about 70,000 pounds of explosive weight.

These sections maintain the trailers used to transfer munitions, keeping track of every missile and bomb, maintain inventories, inspect the facilities and munitions, store conventional warfare, and maintain security of the area.

At any given point in time, approximately 10-15 percent of Airmen are deployed from the flight in support of contingency operations downrange while still supporting home station operations.

“We’ve been down to as few as 35 Airmen before, working at home station,” said Master Sgt. Mike, 432nd MXS munitions flight systems sections chief. “Doing more with less is something that we’ve adapted to.”

The flight recently prepared and shipped 60 AGM-114 Hellfire missiles in only a 24 hour time period, and significantly eased a critical shortage throughout the area of responsibility.

Training fit to fight Airmen
According to leadership, the amount of care put into training ammo troops is second to none. Before Airmen are ever allowed to touch a munition, they are put through a rigorous eight-week course in technical school at Sheppard Air Force Base, Texas. Once out of tech school, Airmen hit the ground running at their first base.

“We take Airmen fresh out of tech school, and we shape them into capable ammo troops so that by the time they leave to another base, they have everything they need to be successful in their careers and personal growth,” Mike said.

After training at Sheppard AFB, ammo Airmen must complete their career development courses (CDC’s). This includes on the job training in tasks such as stockpile accountablity, quality control, planning, managing work orders and running the support sections inside the unit.

“Each of our Airmen should to be a jack-of-all trades,” said Master Sgt. Dan, 432nd MXS munitions flight accountability systems officer. “Training in different sections helps them fit into the big picture, and that’s the kind of ammo troop the Air Force needs.”

As a testament of the outstanding training received by the flight, six Airmen recently scored above a 90 percent on their end of course exams placing them one step closer to achieving a 5-skill level in ammo, allowing them to become “craftsmen” in their jobs.

From there, Ammo troops can continue to progress in their career field and move up into bigger roles of responsibility.

Camaraderie within the unit
In addition to building munitions that provide the combatant commanders with RPAs multi-role capabilities, camaraderie sets Creech Ammo in a class of its own. Spending more than 40 hours a week working, training, performing PT together, eating meals and being geographically separated means intimacy only ammo troops will tell you.

“Ammo is really just one big family,” said Karen. “Since we’re so far away from the rest of base, it’s like we’re in a different world. We respect each other and we’re there for each other. It doesn’t really get much better than that.”

Airmen from the production section work closely together during bomb builds to ensure that all parts are properly built before being moved to the flight line. Supervisor’s work side by side with their Airmen to provide guidance at a pace that is both consistent and fun, while also keeping safety at the forefront.

“It’s important for my Airmen to know that we’re here every step of the way,” said Staff Sgt. Adam, 432nd MXS munitions flight crew chief. “We can joke and have fun while we’re building bombs or missiles, while we’re still taking our job seriously and getting it done.”

It’s this combination of training, dedication, and esprit de corps within the unit that keeps the ammo flight going. Without them, the RPAs wouldn’t have the ability to provide their wide range of mission sets.

The 432nd MXS ammo flight keeps the ground troops safe by enabling abilities such as close-air support, reconnaissance and precision engagement. By keeping them safe, enemies are eliminated from the battlefield, and Americans and coalition partners can return home to their families.