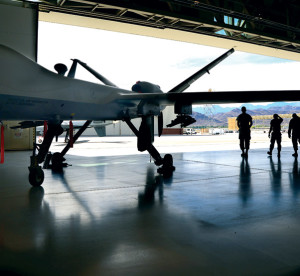 The constant and insatiable demand for remotely piloted aircraft airpower has placed stressors on nearly every career field within the enterprise. For the RPA maintenance career fields, these stressors are causing the retention rates to plummet causing rates lower than that of any other aircraft in Air Combat Command.

CREECH AIR FORCE BASE, Nev. — With a mission fully planned, remotely piloted aircraft and ground control stations must be in complete working order to ensure the aircrew has an operational Remotely Piloted Aircraft to get the mission done successfully and safely.

To accomplish this task, Airmen from more than 19 Air Force Specialty Codes work together to manage the safety of the aircraft by ensuring its weapons are correctly built and loaded, the Ground Control Station’s are operational, the data links are active, and the equipment needed to maintain the aircraft are operational to ensure remotely piloted aircraft operations can be conducted worldwide.

“Our Airmen are on the front-lines everyday contributing to the mission in a bigger way than they see,” said Chief Master Sgt. Stacy, 432nd Aircraft Maintenance Squadron chief enlisted manager. “They are all professionals. Everyone comes with a great attitude when it comes time for business which ultimately is enabling the global RPA enterprise.”

According to Stacey, another impressive aspect for the 432nd Maintenance Group is the Airmen being able to complete the mission and overcoming being undermanned and having low retention rates.

Once the missions have been scheduled, the production superintendents are responsible for overseeing all of the moving parts to getting the RPAs ready to fly. 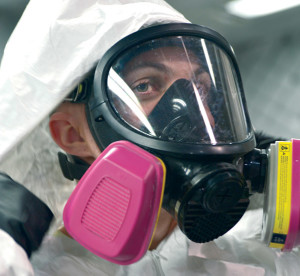 Senior Airman Joshua, 432nd Maintenance Squadron aircraft structural maintenance journeyman dons a mask designed to keep hazardous paint and composite particles from being breathed in before sanding a panel for the MQ-1 Predator Feb. 18, 2016, at Creech Air Force Base, Nev. The aircraft structural maintenance shop is responsible for the repair and fabrication of aircraft skin, structures, metallic tube assemblies, windows, canopies and corrosion control for the MQ-1 Predator and MQ-9 Reaper.

AGE
The men and women of the 432nd MXS aerospace ground equipment shop ensure the equipment needed to service the aircraft are in operational order, both at home and downrange.

“We get our guys the equipment downrange [that is] needed to carry out the mission,” said Senior Master Sgt. Steven, 432nd MXS flight chief. “RPAs can’t take off without ground support assistance, and that’s just what we’re doing here.”

Without AGE, the maintainers deployed in support of global contingency operations wouldn’t have the necessary tools to service the aircraft rendering it inoperable to fly. If the aircraft is unable to fly, the joint combatant command’s needs for intelligence, surveillance, and reconnaissance would not be met.

Before these weapons can be loaded onto an aircraft, the men and women from more than seven ammunition sections must check out the required munitions from the storage area. They must build the bombs, maintain accountability of every piece, and deliver the ordnance to the flight line for loading.

“Without ammo, Creech wouldn’t be able to do its part,” said Senior Master Sgt. Barry, 432nd MXS munitions flight chief. “My unit is made up of some very strong and motivated Airmen, we’re a team. We get the job done, so that other AFSCs can have what they need to do theirs.”

With the ammo delivered to the flight line, it is up to the weapons load crew members to affix the munitions onto the RPA while ensuring they’re ready in case the aircrew needs to use them. The munitions are loaded on the aircraft with a configuration best suited for the mission’s objective. 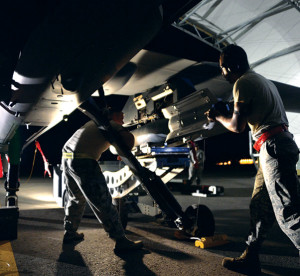 Airmen from the 432nd Aircraft Maintenance Squadron load a GBU-12 Paveway II laser-guided bomb on an MQ-0 Reaper Aug. 5, at Creech Air Force Base, Nev. The maintenance crew was evaluated on timeliness, safety, and precision of loading munitions on remotely piloted aircraft as part of the 2015 Air-Ground Weapons Systems Evaluation Program also known as Combat Hammer.

If the structure isn’t sound, the aircraft structural maintenance shop will determine the type and severity of the damage, and whether or not it’s repairable. If a structural repair is needed, the aircraft will be taken off the line and replaced with another.

“If we didn’t exist, there wouldn’t be a means of organizational level or even field level repair,” said Tech. Sgt. Daniel, 432nd MXS aircraft structural maintenance craftsman. “If an MQ-1 or MQ-9 had a structural flaw caused by wear and tear, moisture absorption or any way of structurally damaging the aircraft, it would eventually, dependent on the damage, become structurally unsound and not airworthy.”

Like structural maintenance, avionics Airmen play their part in the bigger picture of RPA operations. These Airmen make certain all the electronics in the aircraft wired together to make everything work in harmony.

Before flight, the crew chief conducts a thorough pre-flight inspection to verify the RPA is air worthy. These inspections include checking antennas, landing gear, brakes, wings, tail planes, engines, making sure openings are free of foreign objects, and ensuring the plane is not leaking any fluids.

GCS
While the plane is being serviced and prepared on the ground, Airmen from the 432nd Aircraft Communication Maintenance Squadron, are at work behind the scenes inspecting the GCS’s and conducting pre-flight servicing, as well as ensuring the processers, screens, links, and networks are operational. In essence, the ACMS provides the link between aircrews in the GCS to the plane miles away.

The ACMS Airmen are unique, as they are members of the only aircraft communications maintenance squadron in the Air Force responsible for both maintaining GCSs as well as ensuring the entire data link is ready to support the aircraft.

Each and every maintainer has their own part to play in the success of the RPA enterprise and making it work. No matter their career field or what minute task lay ahead, for the importance of the mission, even tightening a screw serves a greater purpose.

“These Airmen are saving lives every single day and enabling others to save lives,” said Chief Master Sgt. Robert, 432nd MXS maintenance superintendent. “The maintainer who thinks they’re just fixing a maintenance stand is actually fixing the stand so that a crew chief can get the plane to fly, so the aircrew can train and gain experience flying, so they can keep someone on the ground safe downrange and be able to return home to their families.”

Editor’s note: The last names of certain individuals in this story have been removed for security reasons.