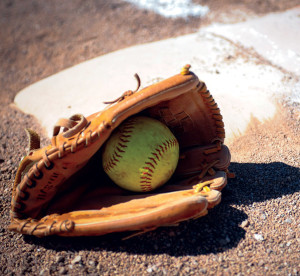 A ball and glove lay ready on a softball field at Nellis Air Force Base, Nev., March 22. On March 14, Nellis AFB kicked off the intramural softball season where 14 teams from around the base will compete to see who can call themselves the champions. Airmen who are interested in playing during the intramural season, contact the unit sports representative or the Warrior Fitness Center at 702-652-4891.

NELLIS AIR FORCE BASE, Nev. — On March 14, Nellis AFB kicked off the intramural softball season where 14 teams from around the base will compete to see who can call themselves the champions.

Softball games, which are held Monday through Thursday from 5:30 to 7:30 p.m., are meant to build goodwill between the units.

“It’s all about comradery, having fun and having a little bit of competition,” said Kent Terrillion, 99th Force Support Squadron Warrior Fitness Center sports director. “Sometimes seeing someone who is a part of your squadron that you don’t work with on a day to day basis will bring that comradery together.”

With the Warrior Fitness Center hoping that Airmen can have fun playing softball, the intramural league is also used as a way to build on the four pillars of comprehensive fitness.

“The main point is to provide a feasible outlet for Airmen and their families to strengthen their four pillars of comprehensive fitness,” said Staff Sgt. Troy Lee, 99th FSS Warrior Fitness Center NCO in charge of intramural sports. “Airmen hope to take away a healthier atmosphere, both physically and mentally. The dynamic of teams allows for a fun, competitive environment that gets teams interacting within and outside their units.”

While some units can fully man a softball team, members of smaller units who can’t man a full roster, are able to enter a player’s pool where they can also participate in the softball season, but will need to work with their unit’s sports representative.

“I think that one of our important contributors to a successful intramural league is the unit’s sports representative,” said Terrillion. “They are the contact from the Warrior Fitness Center to the unit to get information out about the league and will request coaches and players from their units.”

With the season underway, Terrillion says that there are incentives for finishing first, as well as finishing runner-up.

“When the season ends, we will do a single elimination tournament at the end of the season and we will have trophies for the championship team as well as for the runner-ups,” said Terrillion. “Also, we will have t-shirts for both teams as well.”

Outside of an intramural sports league, Nellis AFB is pushing to have a varsity softball team, in hopes of playing with other military installations and teams in downtown Las Vegas.

“We work with Nellis intramural sports, and we have varsity sports teams where they will compete in downtown Las Vegas and they also play against other military installations,” said Terrillion. “We have a varsity softball head coach right now who is looking for players, so we are hoping the units sports representatives will pass along the word so we can have a varsity team.”

With the season beginning in the middle of March, the league is planned to be finished during May before the summer temperatures get to hot to play.
For more information about the varsity softball team or for Airmen who are interested in playing during the intramural season, contact the unit sports representative or the Warrior Fitness Center at 702-652-4891.