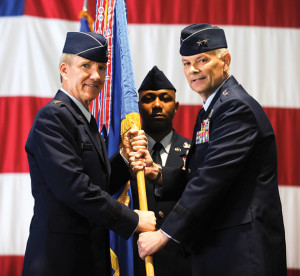 Maj. Gen. Jay Silveria, USAFWC commander since February 2014, handed over command to Maj. Gen. Glen VanHerck during a change of command ceremony aimed at celebrating the U.S. Air Force Warfare Center accomplishments, and the Airmen behind the continued efforts on testing, tactics and training.

“All of us who’ve had the great honor to command know that we do so only with the dedicated support of many,” said Silveria. “As the Warfare Center goes, so goes the Air Force; that saying exists because of you all. You never cease to amaze me.”

Silveria, a command pilot with more than 3,900 hours at the controls of a variety of Air Force fighter platforms, presided over some of the most intense efforts by USAFWC members to propel the F-35 Lightning II program toward initial operational capability in accordance with Department of Defense goals.

“It seemed that every week we were hitting new milestones,” said Silveria. “Our maintenance professionals represented themselves and performed at the very highest level every step of the way.”

Maj. Gen. VanHerck also has a great depth of experience in a variety of aircraft, and comes to the USAFWC off of his assignment as Director of Operations, Headquarters Air Force Global Strike Command. His address to the crowd focused on his recognition of his responsibility in command, and challenged his Airmen to join him in striving for continued success.

The USAFWC has long been at the forefront of developing innovative leaders and full spectrum capabilities through responsive, realistic, and relevant Air Force and joint testing development, and advanced training across all levels of war. VanHerck’s challenge to his new Airmen was simple.
“I ask you to keep pushing every day to stay the innovators you’ve proven yourselves to be.”